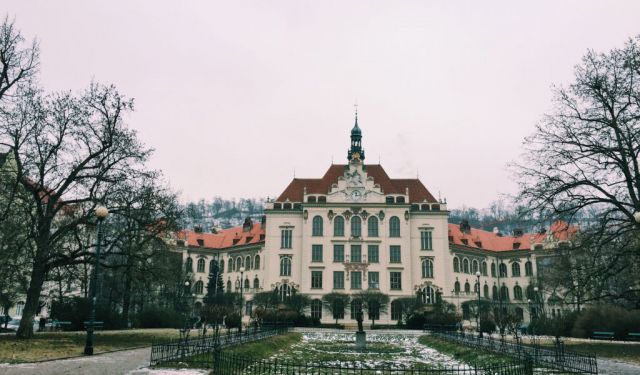 I can’t quite make up my mind whether, as a traveler, I’m a spreadsheet-loving organization-aholic, or an I’m-a-free-bird burn-all-the-maps kind of wanderer. Leading up to our Prague trip, I was honestly just too busy to plan… and I felt the aftershocks of lack of planning in the various disasters I encountered over the weekend. However, one of the best parts of our lack of organization was our morning exploring the Karlin district of Prague! Karlin district is a bit off the beaten path, and seen as a more hipster (and a bit gentrified), residential neighborhood. Unlike the touristy Prague 1, in Karlin district you can relax and just… wander.

That’s exactly what we did, at least, and in the end our lack of planning led to some wonderful surprises!

Karlin district is on the east side of Prague 1, south of the river. It has a dramatic history as the home of both neo-Nazis and Romas in the 80’s. It was hit particularly hard by floods in 2002, and since then the renovations have given the little district a bit of a facelift. It is now seen as a hipster hangout, partly in thanks to the cafe Muj Salek Kavy. It’s a pretty simple neighborhood, organized by three parallel roads, one of which includes the metro system. It only took us a few hours to walk the length of Karlin, which included more than one stop for coffee. Speaking of coffee… ...... (follow the instructions below for accessing the rest of this article).
This article is featured in the app "GPSmyCity: Walks in 1K+ Cities" on iTunes App Store and Google Play. You can download the app to your mobile device to read the article offline and create a self-guided walking tour to visit the attractions featured in this article. The app turns your mobile device into a personal tour guide and it works offline, so no data plan is needed when traveling abroad.