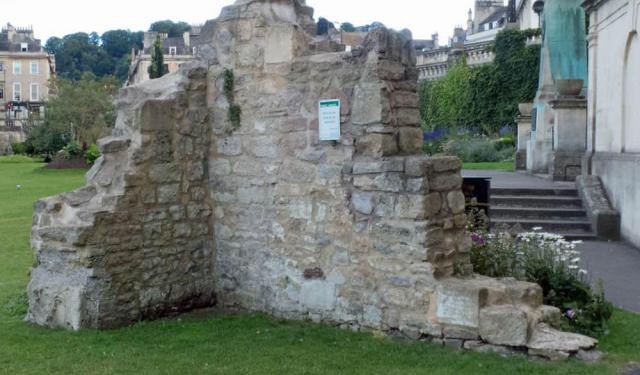 The city of Bath is famous for its Roman remains and Georgian architecture. But what happened in the intervening centuries? And where can you see evidence of medieval Bath today?

The Romans left Britain around 400 CE, and Bath sank into relative obscurity until its re-emergence as a fashionable spa town. We do know that the city was inhabited during the Saxon period. A monastery was established here, and King Alfred the Great fortified the town. However, the Roman baths were not maintained, and they gradually disintegrated into ruins and marshland.

After the Norman Conquest an abbey was built on top of the Saxon monastery. The hot baths were revived, and Bath became an important centre for the wool and cloth trade. The town was granted a market charter in 1189, increasing its wealth and power.

The Saxon and medieval towns closely followed the Roman layout. The city was a compact walled area, with limited development outside the walls.

Although the medieval city walls have almost disappeared, their route is still apparent. The northern and southern boundaries are now marked by the roads known as Upper Borough Walls and Lower Borough Walls. And Westgate Street and Southgate Street indicate the locations of two of the four original entrances to the city. ...... (follow the instructions below for accessing the rest of this article).
This article is featured in the app "GPSmyCity: Walks in 1K+ Cities" on iTunes App Store and Google Play. You can download the app to your mobile device to read the article offline and create a self-guided walking tour to visit the attractions featured in this article. The app turns your mobile device into a personal tour guide and it works offline, so no data plan is needed when traveling abroad.