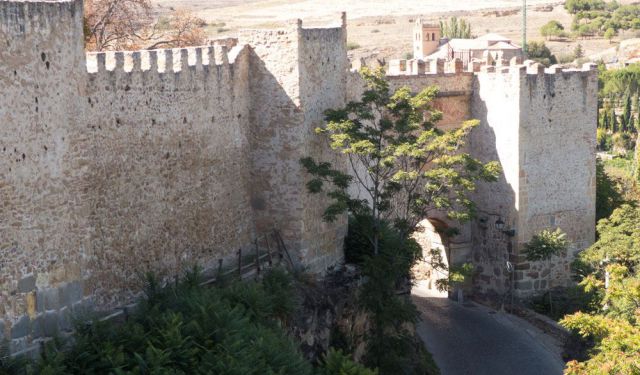 Exploring the City Walls and Alcazar of Segovia, Segovia, Spain (B)

Segovia’s fortifications tend to be a bit overshadowed by the city’s main tourist atraction, the Roman aqueduct. But the city walls and Alcazar (fortified castle) are an important part of Segovia’s history. And they offer the visitor some spectacular views of the surrounding countryside, and a peaceful walk around a less visited part of town.

The Romans began enclosing their towns during the 2nd century, and it is likely that Segovia’s first fortifications were built at this time. However, the walls and castle that you see today are medieval in origin, built to defend the city from the Moors. They fell into disuse in later years, and gradually declined, but were restored in the 20th century.

The walls are 3.5 km long. They originally included a number of gates, fortresses and towers, but many of these have now disappeared. Work has been done on recreating some parts of the wall, such as the Puerta de San Andres, and on making it accessible for tourists. Together with the old town and aqueduct of Segovia, the walls and Alcazar became part of a UNESCO World Heritage Site in 1985. ...... (follow the instructions below for accessing the rest of this article).
This article is featured in the app "GPSmyCity: Walks in 1K+ Cities" on iTunes App Store and Google Play. You can download the app to your mobile device to read the article offline and create a self-guided walking tour to visit the attractions featured in this article. The app turns your mobile device into a personal tour guide and it works offline, so no data plan is needed when traveling abroad.