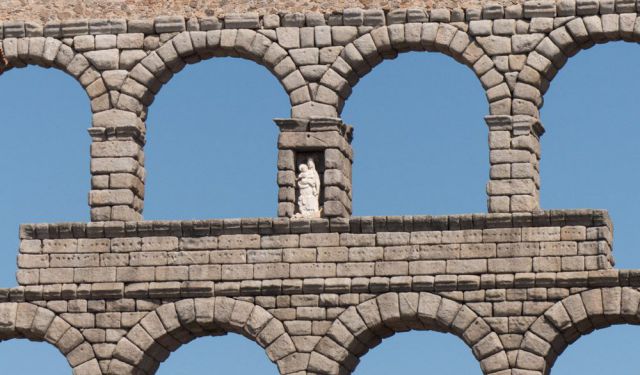 Exploring the Roman Aqueduct of Segovia, Segovia, Spain (B)

It is the classic view of Segovia. The spectacular Roman aqueduct that dominates the town and reaches out towards the mountains. Visitors clamber to the top for the views, or walk between its arches. They might even float gently above it in one of the colourful hot-air balloons that are so popular around here. But, as I discovered, the 167 tall arches of the Aqueduct of Segovia are only a part of a much larger structure. The whole thing is a magnificent feat of Roman engineering.

The exact origins of the aqueduct are unknown, although it is thought to date back to the 1st century. What we do know is that the Romans built it as a way of bringing water from the mountains to the hilltop settlement of Segovia. This meant building a massive bridge to carry the water channel across the valley between the city and the mountains.

The aqueduct starts 15 km from the city. Obviously the water had to run on a gentle but continuous slope, so parts of the structure had to be raised above the ground to take account of the undulating landscape. Where it crosses the valley it stands on tall arches (double arches at the highest point), at one point standing 28 m above the ground. The aqueduct has been restored and rebuilt throughout the centuries and it continued to supply water to the city until the 19th century. Along with the old town and fortifications, the Aqueduct of Segovia became a UNESCO World Heritage Site in 1985. ...... (follow the instructions below for accessing the rest of this article).
This article is featured in the app "GPSmyCity: Walks in 1K+ Cities" on iTunes App Store and Google Play. You can download the app to your mobile device to read the article offline and create a self-guided walking tour to visit the attractions featured in this article. The app turns your mobile device into a personal tour guide and it works offline, so no data plan is needed when traveling abroad.