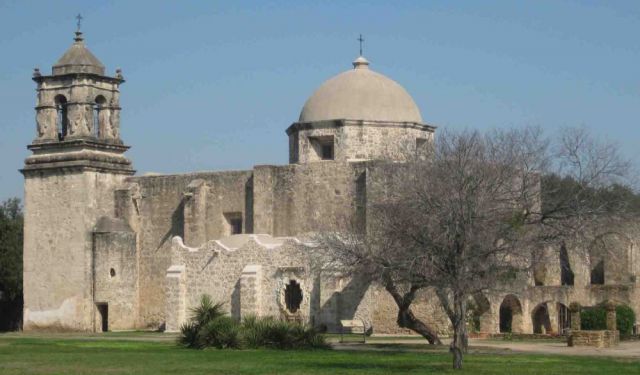 What a wonderful holiday weekend. I flew down to San Antonio to spend time with my new beaux, David. After a relaxing Thursday evening, we spent Friday riding bikes a long the green belt to tour all the missions, now named a World Heritage Site.

The City of San Antonio owes its existence to the rich mission heritage. A mission was an institution used by the Spanish to transplant their culture to frontier regions. The missions taught native people not only the Catholic faith, but also many occupational skills and the way of the Spanish government.

We started out at Mission Espada which was founded in East Texas in 1690 as San Francisco de Los Tejas. The oldest East Texas mission was moved to the San Antonio River in 1731 and was renamed to San Francisco de la Espada. Here, the Spanish Franciscan mission taught American Indians farming, black smithing, weaving, masonry and more. It was the only San Antonio Mission that made brick and tile. The Spanish language and Catholicism was the adopted way of life of the 52 families that called the mission home. ...... (follow the instructions below for accessing the rest of this article).
This article is featured in the app "GPSmyCity: Walks in 1K+ Cities" on iTunes App Store and Google Play. You can download the app to your mobile device to read the article offline and create a self-guided walking tour to visit the attractions featured in this article. The app turns your mobile device into a personal tour guide and it works offline, so no data plan is needed when traveling abroad.