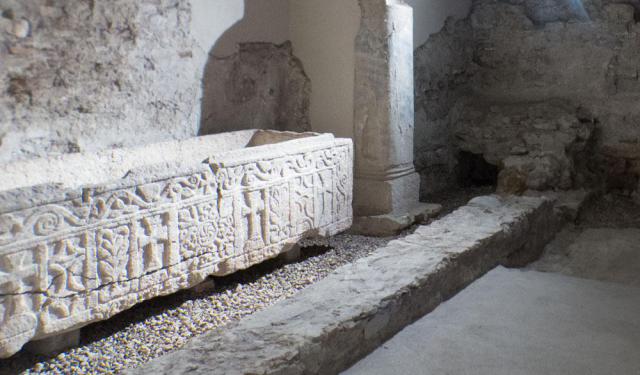 Exploring Tridentum, the Roman City of Trento, Trento, Italy (B)

Trento, in northern Italy, is best known as a Renaissance city. However, the area has been settled since ancient times, most notably by the Romans, who arrived in the 1st century BC. They founded a city which they named Tridentum and, if you look hard enough, you can still see plenty of evidence of the Romans in Trento.

There seems to be more than one explanation for the name Tridentum (or Tridentium). The Romans certainly associated the town with the god Neptune, who is always shown carrying a trident (look out for the Fountain of Neptune in the Piazza Duomo). One theory for this association is that, although it is a long way from the sea, Tridentum was abundant with water, with the river, the nearby lakes, and the water that was brought down from the hills. Alternatively, the name could derive from the three hills that surround the city (the three “teeth” of a trident).

However it got its name, Tridentum was an important settlement. The Romans chose it for its strategic location, guarding an important trade route between the Mediterranean and central Europe. They built a garrison on the site, and laid out the city in the regular Roman style, with houses, public buildings and a drainage system. Unusually, there were two walls around the city, built at different times. ...... (follow the instructions below for accessing the rest of this article).
This article is featured in the app "GPSmyCity: Walks in 1K+ Cities" on iTunes App Store and Google Play. You can download the app to your mobile device to read the article offline and create a self-guided walking tour to visit the attractions featured in this article. The app turns your mobile device into a personal tour guide and it works offline, so no data plan is needed when traveling abroad.