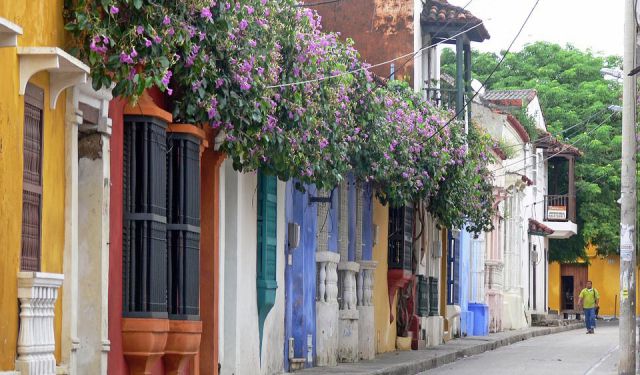 Welcome to Cartagena de Indias, the biggest prize in the Caribbean Sea for pirates; it was here, in the times of the colony (1533-1819) where most of the gold, silver, emeralds and agricultural produce like potatoes, corn, tobacco or sugar, were gathered and sent to Spain 2 times a year in a huge fleet of ships.

Cartagena de Indias was founded (1533 AC) in this specific location by the Spanish conquistador Pedro de Heredia, because it had natural defenses to stop attackers by sea and also by land.

The initial settlement was made on the terrains of a tribe called Kalamari from the Karib family. It is on the shores of a totally secluded bay that has only two entrances,Bocagrande (bigmouth) and Bocachica (smallmouth), a huge mangrove swampembraces the territory to the north side, and the only walkable terrain is guarded by 2 mountains that give at their top 360° look of the surroundings.

But even though the natural defenses, the port was attacked; in 1568 the British pirate John Hawkins, tried to overtook the city but was repelled. Afterwards, cameFrancis Drake who did invade the city with his men, and got paid the ransom asked for the pirates to leave Cartagena de Indias. ...... (follow the instructions below for accessing the rest of this article).
This article is featured in the app "GPSmyCity: Walks in 1K+ Cities" on iTunes App Store and Google Play. You can download the app to your mobile device to read the article offline and create a self-guided walking tour to visit the attractions featured in this article. The app turns your mobile device into a personal tour guide and it works offline, so no data plan is needed when traveling abroad.