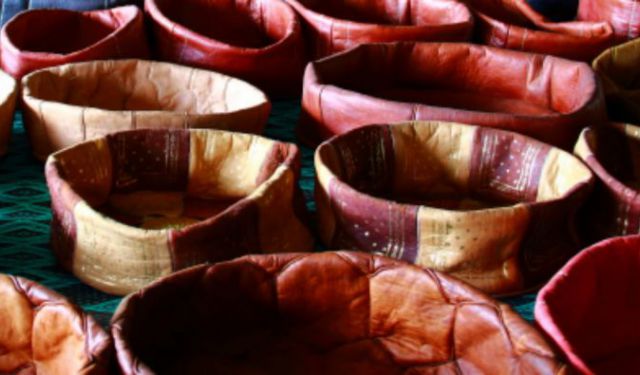 The narrow passages ways of the medina in Fes were deserted. I had expected to be pushing my way through crowds and resisting attempts to be drawn into the small shops that lined the narrow thoroughfares but they were securely bolted behind doors of a variety of hues and sizes. It resembled Christmas day in England and our guide, Hamid, explained that it was the second day of the most important festival in Morocco Eid Al-Kabir – which has great significance for Muslims.

Festivals in Morocco are very low key and although small gifts may be given to children the real focus is the event it commemorates and for Eid Al-Kabir it is the willingness of the Prophet Abraham to obey God and sacrifice his son. When he tried to do this he was stopped by God and told to sacrifice a ram instead. This day is still observed by Muslims when they slaughter an animal, usually a sheep, according to Islamic humane guidelines (zabihah) and then offer some of the meat in charity. Only those who can afford to buy a sheep are expected to participate but many poor families in Morocco will borrow money to sacrifice their own sheep or goat because the real significance of this day is following the example of Abraham’s faithful obedience to God. The day starts with congregational prayers before the slaughter. This had taken place the previous day while we were in Casablanca and visitors had been requested to stay away from the Great Mosque of Hassan II until mid-morning. We just had time to stroll around the outskirts of this magnificent building, the third largest mosque in the world, before getting the train to Fez.  ...... (follow the instructions below for accessing the rest of this article).
This article is featured in the app "GPSmyCity: Walks in 1K+ Cities" on iTunes App Store and Google Play. You can download the app to your mobile device to read the article offline and create a self-guided walking tour to visit the attractions featured in this article. The app turns your mobile device into a personal tour guide and it works offline, so no data plan is needed when traveling abroad.