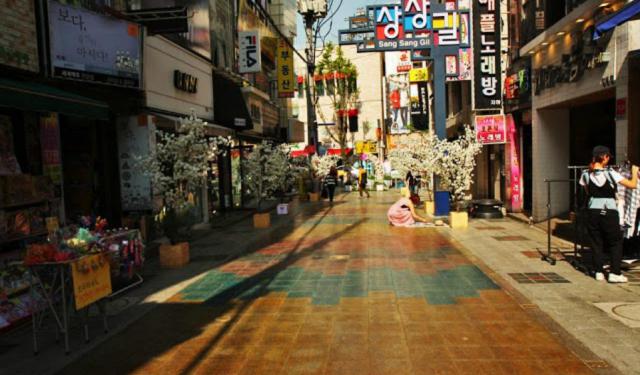 I made my mark in South Korea! A section of Dongseobuk 10-gil is tiled with 23,000 names of people from all over the world, mine included! Changwon City and Korea Tourism Organization has named this road as Sangsang-gil or Imaginary Road. And that is what I had set out to find in Masanhappo District in Changwon City in the province of Gyeongsangnam (South Gyeongsang). It would have remained as its name claims it is—imaginary—had I not seen it with my own near-sighted eyes.

The quest for this Imaginary Road was not included in my itinerary, but a small pocket of time had presented itself, so off I go some 45 kilometers west of Busan, in a city so unfamiliar to non-Koreans (well, at least according to my research which didn't yield many useful results) that it was a miracle I found my way to this little walk of...fame? Yes, just to see my name engraved on a 6" x 6" tile was the only reason why I went out of my way and out of my itinerary.

Take Busan Subway Line 2 to Sasang Station, exit 3 or 5. From either exit, find Busan Seobu Intercity Bus Terminal. Buses headed to Masan in Changwon City depart every 10 minutes. One way ticket costs KRW 3,500. The trip takes 30 minutes. ...... (follow the instructions below for accessing the rest of this article).
This article is featured in the app "GPSmyCity: Walks in 1K+ Cities" on iTunes App Store and Google Play. You can download the app to your mobile device to read the article offline and create a self-guided walking tour to visit the attractions featured in this article. The app turns your mobile device into a personal tour guide and it works offline, so no data plan is needed when traveling abroad.