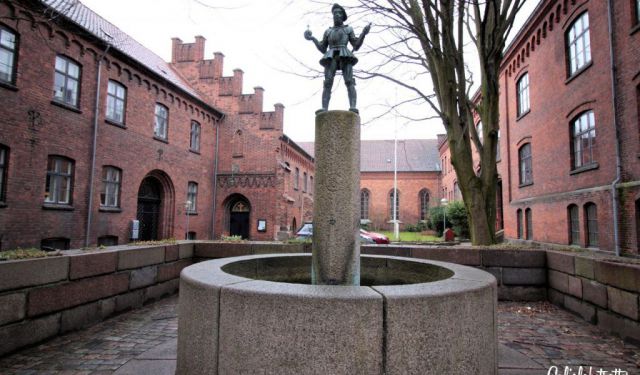 About an hour and half southwest of Copenhagen is Denmark’s third largest town, Odense, on the island of Funen. Not your typical tourist hot spot, especially amid a bitterly cold winter. While recently being a guest at the Langeso Castle, we drove into Odense to learn more about the area and one person in particular: Hans Christian Andersen.

Hopefully everyone knows who is he, although I’m not going to lie, the name was a mystery to me up until a few weeks ago. Perhaps you’ve heard of the following fairy tales all written by the Odense’s beloved town resident: The Little Mermaid, The Ugly Duckling, The Emperor’s New Clothes and my personal favorite, Thumbelina, to name a few.

Born on April 2, 1805 in Odense, quite possibly as an illegitimate son of King Christian VIII of Denmark, although this has yet to be confirmed. Hans Christian was introduced to literature by his father before his death and later his mother, an illiterate washwoman, sent him to a local school for poor children where he had to work as an apprentice, first to a weaver and then to a tailor to support himself. Odense was particularly afflicted by rampant poverty and child mortality rates and many of Andersen’s stories were born out of these extreme conditions, in which he often imagined an alternate world inspired by his daily life which we have all come to know and love. ...... (follow the instructions below for accessing the rest of this article).
This article is featured in the app "GPSmyCity: Walks in 1K+ Cities" on iTunes App Store and Google Play. You can download the app to your mobile device to read the article offline and create a self-guided walking tour to visit the attractions featured in this article. The app turns your mobile device into a personal tour guide and it works offline, so no data plan is needed when traveling abroad.