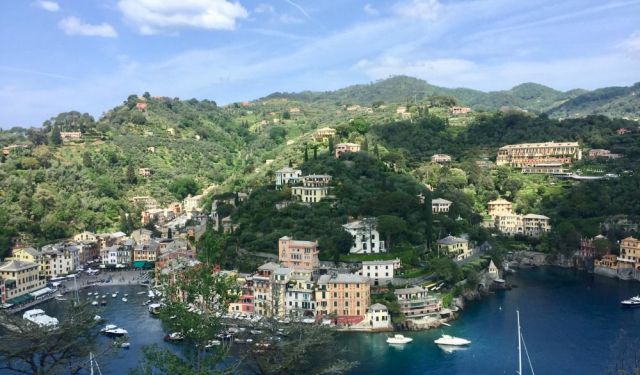 My main reason for the trip was to attend a 3-day art history course with Hotel Alphabet, but it wasn’t my only reason. Genoa had been a destination I’d in mind for a long time – and the reasons were almost totally food-related! For Genoa is the capital of Liguria, famed gastronomically for the birth of pesto, focaccia and their delicate olive oil. But what also appealed would be a trip to the Cinque Terre. I’d heard so much about how beautiful it is and know people who’ve walked the UNESCO coastal path.

Genoa offers much more than food and pretty coastal villages though. It’s the sixth largest city in Italy and has a strong commercial and financial history. Casa di San Giorgio, established in 1407, is one of the oldest in the world; during a tour of the city with Hotel Alphabet we stood in Piazza Banchi and saw the site of the bank and the old stock exchange; there are still a number of banks in the square.

Genoa also has a long history as one of the largest and most important ports in the Mediterranean. Culturally, it’s the birthplace of many famous people: Cristoforo Colombo (indeed he gives his name to the airport); Niccolò Paganini of violin fame – and the prize for an annual competition for young musicians is to be allowed to play one of his violins; Guiseppe Mazzini, a 19th century politician and activist who helped bring about an independent and united Italy; and one of today’s leading architects, Renzo Piano, who designed London’s The Shard and the Georges Pompidou centre in Paris. ...... (follow the instructions below for accessing the rest of this article).
This article is featured in the app "GPSmyCity: Walks in 1K+ Cities" on iTunes App Store and Google Play. You can download the app to your mobile device to read the article offline and create a self-guided walking tour to visit the attractions featured in this article. The app turns your mobile device into a personal tour guide and it works offline, so no data plan is needed when traveling abroad.