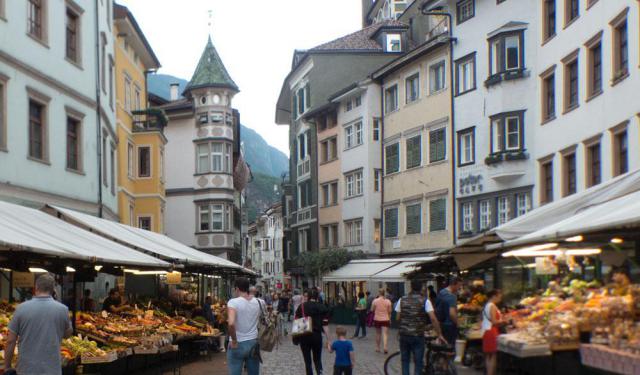 The city of Trento, capital of the Trentino province of northern Italy, is not well known to tourists. However, according to a recent article by Forbes, it is one of the five most underrated Italian cities, and they advise you to visit before it is discovered by everyone else! So why should you visit Trento, and what makes it special?

Like many towns in Italy, Trento is primarily a Renaissance city. The historic centre is full of grand buildings, churches and piazzas. Wandering the streets is a voyage of discovery, assisted by information panels outside the buildings detailing their history and architectural periods.

But what makes Trento special among Italian cities is the quality and quantity of its frescoes. These adorn many of the palazzi, and can be seen in abundance in the magnificent Castel Buonconsiglio. The frescoes have led to Trento being known as “The Painted City”. Read more about Trento the Painted City…

Trento was prominent during the Renaissance, and is probably best known for the Council of Trent, convened by the Catholic Church in 1545 in response to the Protestant Reformation. However, its history goes back into antiquity. The Romans established the city of Tridentum here, and today you can explore the remains of the ancient city. Read more about Roman Trento… ...... (follow the instructions below for accessing the rest of this article).
This article is featured in the app "GPSmyCity: Walks in 1K+ Cities" on iTunes App Store and Google Play. You can download the app to your mobile device to read the article offline and create a self-guided walking tour to visit the attractions featured in this article. The app turns your mobile device into a personal tour guide and it works offline, so no data plan is needed when traveling abroad.