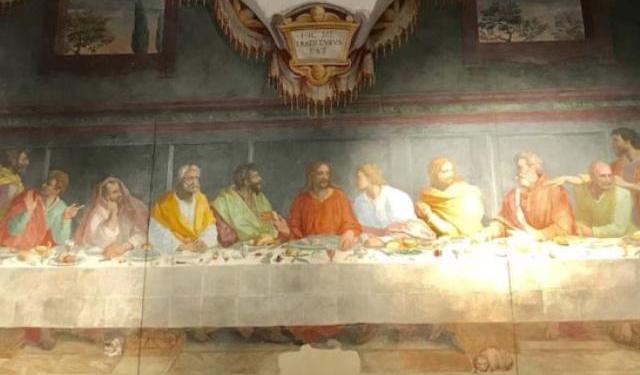 When someone mentions the Last Supper, you probably think of the famous painting by Leonardo da Vinci. But da Vinci wasn’t the only one to paint this Biblical scene – nor was he the first. In Florence you can find quite a selection of Last Suppers if you know where to look.

The tradition of painting Biblical scenes is a long one and Last Suppers were always a part of that. But in the 1300s this supper scene became a popular one in convents and monasteries in Florence. It would be painted on the end wall of the long refectories where the monks or nuns gathered to eat. So as they thoughtfully munched their meal, they could look up and see Jesus and his disciples eating right alongside them.

In Italian a Last Supper painting is known as a cenacolo (pronounced something like: chain a colo) and the plural is cenacoli (like: chain a colee). It’s also sometimes referred to as the ultima cena.

Whatever you call them, these wonderful works of art are worth a look. Since they were painted in convents and monasteries, some of them were unknown to the public for hundreds of years. Other than the two in large churches (Santa Croce and San Marco), they are off the beaten tourist track. That means that you’ll probably be able to experience these paintings without the crowds – sometime just on your own. It’s a lovely little treasure hunt. ...... (follow the instructions below for accessing the rest of this article).
This article is featured in the app "GPSmyCity: Walks in 1K+ Cities" on iTunes App Store and Google Play. You can download the app to your mobile device to read the article offline and create a self-guided walking tour to visit the attractions featured in this article. The app turns your mobile device into a personal tour guide and it works offline, so no data plan is needed when traveling abroad.