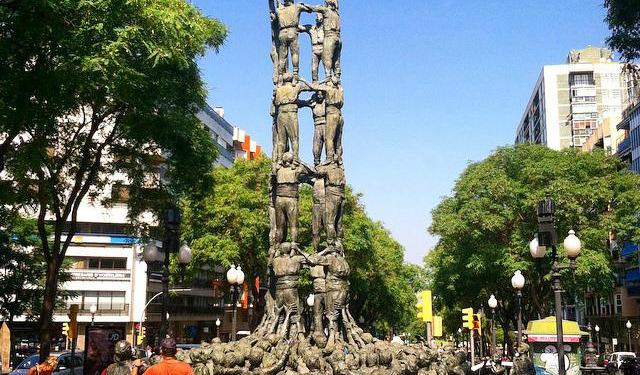 On my last day in Barcelona this summer, I decided to leave! It was high time for me to reach beyond the borders of that awesome town, and, after many moments exploring Google Maps, I selected Tarragona for my daytime venture.

The €8,05 train from Barcelona-Sants to Tarragona was air conditioned and had plenty of seats. It took just over one hour to get to Tarragona, and the train tracks run along the Mediterranean most of the trip. There are some more expensive trains that may be a few minutes faster, but it's basically the same to take the regional train and pay half the price.

The Romans first called it Tarraco in their Hispania Tarraconensis province, and it was a popular fortification both for its position and great weather. It became a very wealthy Roman city and received much attention from various rulers. Tarragona passed through many different hands after the Roman Empire fell, and today is in the Catalunya region of Spain. There have been ongoing projects for archaeological excavations and preservations throughout the city since the 1800s. ...... (follow the instructions below for accessing the rest of this article).
This article is featured in the app "GPSmyCity: Walks in 1K+ Cities" on iTunes App Store and Google Play. You can download the app to your mobile device to read the article offline and create a self-guided walking tour to visit the attractions featured in this article. The app turns your mobile device into a personal tour guide and it works offline, so no data plan is needed when traveling abroad.