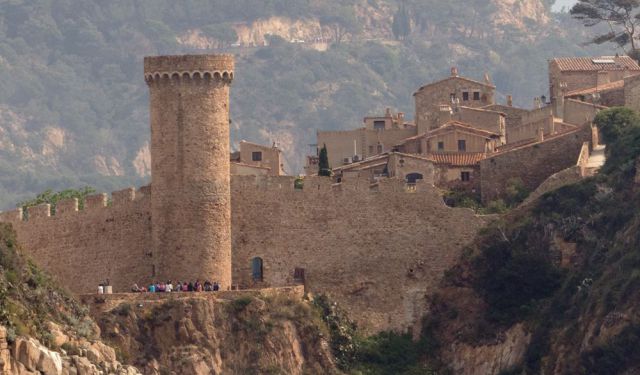 Tossa de Mar is a popular tourist destination. Not just for the beauty of its location on Spain’s Costa Brava, or the quality of its food and hospitality, but also because of its long and varied history. You can explore this history as you walk around the town, taking in the Roman settlement, the medieval fortifications and the more recent cultural and artistic tradition.

Tossa de Mar may be small but there is a surprising amount to discover. The star attraction is undoubtedly the Vila Vella, the fortified town built in the 13th century to protect the town’s population from the pirates and other invaders who frequented the coastline. The inhabitants at that time were mainly fishermen and their families, but at times of trouble the local farmers would also seek safety inside the walls. People still live in the Vila Vella today, and in some ways it looks much as it must have done in the Middle Ages, especially if you wander off the main paths and down the narrow passages between the houses. ...... (follow the instructions below for accessing the rest of this article).
This article is featured in the app "GPSmyCity: Walks in 1K+ Cities" on iTunes App Store and Google Play. You can download the app to your mobile device to read the article offline and create a self-guided walking tour to visit the attractions featured in this article. The app turns your mobile device into a personal tour guide and it works offline, so no data plan is needed when traveling abroad.