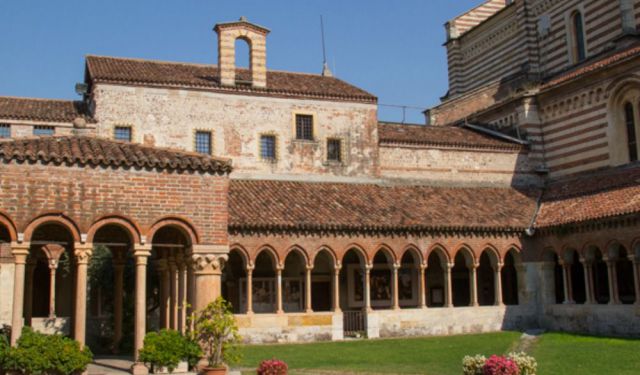 Verona, in Italy is a World Heritage UNESCO site and deservedly so. It is the only place I know where you can peel away its history layer by layer. I have already explored Roman Verona and Medieval Verona today I was exploring the Venetian influence. Turning away from the main centre, Piazza Bra, I headed towards Porta Nuova once the main entrance to the city. When Verona became part of the Republic of Venice (known as la Serenissima Repubblica) in 1405 it was the start of a long period of stability for Verona. This lasted until the end of the eighteenth century when Napoleon’s troops marched into the city. It also heralded the arrival of the Renaissance which was spreading through Italy. Veronese architect Michele Sanmicheli was entrusted with the task of re-building the defences of the town during the sixteenth century. When it was built this entrance penetrated a massive defence system. Now it is a traffic island.

After I had done a circuit of this impressive gate I noticed a path that would take me onto the city walls. I love to walk round city walls as, apart from an elevated view of my surroundings the trees would offer some welcome shade. I strolled along until I spotted the next gate, Porta Palio. This gate was built by the Venetian Republic between 1542 and 1557 and is one of the most important architectural works of Michele Sanmicheli. It was originally dedicated to San Sisto but was known as the Stupa as it was off limits to all regular traffic. The name was changed to reflect the fact that it became the starting point of the Verona Palio. This was a race on foot and horseback. Dating back to 1208 it is the world’s oldest running event and was run every year until the end of the eighteenth century. Dante Alighieri, Italy’s great poet, referred to this event as the Race of the Green Cloth. This was a reference to the prize, a green cloth that was awarded to each of the winners of the horseback race and the running race. The consolation prize had more substance – a leg of pork. The race was revived in 2008 and a green cloth is still awarded to the fastest man and woman. ...... (follow the instructions below for accessing the rest of this article).
This article is featured in the app "GPSmyCity: Walks in 1K+ Cities" on iTunes App Store and Google Play. You can download the app to your mobile device to read the article offline and create a self-guided walking tour to visit the attractions featured in this article. The app turns your mobile device into a personal tour guide and it works offline, so no data plan is needed when traveling abroad.