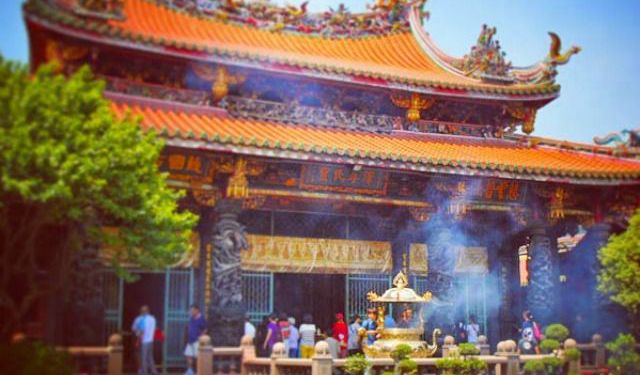 Longshan Temple was founded in 1738 and is dedicated to the Buddhist Goddess of Mercy. But the temple now isn't the original structure. This one was built in 1919 and currently houses many Buddhist and Taoist deities.

When we visited Longshan Temple, many locals were there with offerings and prayers. We were clueless who the gods were and what the locals' rituals were. It would have been nice to have had a guide for some enlightenment.

Bopiliao Old Street and its buildings go back to the Qing Dynasty. Pretty old indeed. On one end of the street is the Heritage and Culture Education Center where one can learn about its history and significance. Bopiliao Old Street can't be found on the map, search instead for Lane 173 Kangding Road—that is its current street name.

Bopiliao Old Street was maybe less than 100 meters long. The surrounding buildings were clean and well restored...but the space could have been put to better use. Only a few of the buildings (maybe two or three) were in use (one was used for an art exhibit). It would have been nice to have a restaurant or a coffee/tea shop in the area. Bopiliao Old Street reminded me of Calle Crisologo in Vigan. ...... (follow the instructions below for accessing the rest of this article).
This article is featured in the app "GPSmyCity: Walks in 1K+ Cities" on iTunes App Store and Google Play. You can download the app to your mobile device to read the article offline and create a self-guided walking tour to visit the attractions featured in this article. The app turns your mobile device into a personal tour guide and it works offline, so no data plan is needed when traveling abroad.