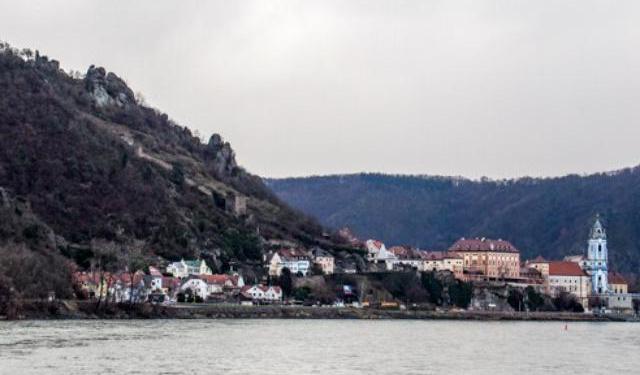 From Dürnstein to Melk, Durnstein, Austria (B)

Since we’ve been on the Danube, three days, all of our cruising has taken place at night. Today, however, we enjoyed the river’s beautiful scenery in the Wachau Valley, a UNESCO World Heritage Site.

Our first stop this morning, for only a few hours, was in Dürnstein, which means dry rock. The picturesque, small town in Austria’s Wachau Valley, was established in 1150 by the ruling Kuenring family who built a fortress on the hill (different from Kuenringerburg, the current hilltop ruins). Dürnstein is known for its wine and apricots, and vineyards can be seen across the landscape.

In Dürnstein, Krisitin and I climbed the up to Kuenringerburg. There are two ways to the castle. We completed a horse shoe loop, starting just at the eastern edge of the village. We followed a road to a dirt path which led us to magnificent views of the valley below. Our return led us down some stairs that ended toward the western side of Dürnstein. The roundtrip took about 45 minutes.

Kuenringerburg, a fortress from the 1200’s is now a bunch of ruins atop a hill overlooking the village. The castle was damaged by Swedish troops during the Thirty Years’ War in 1645 and left to crumble. ...... (follow the instructions below for accessing the rest of this article).
This article is featured in the app "GPSmyCity: Walks in 1K+ Cities" on iTunes App Store and Google Play. You can download the app to your mobile device to read the article offline and create a self-guided walking tour to visit the attractions featured in this article. The app turns your mobile device into a personal tour guide and it works offline, so no data plan is needed when traveling abroad.