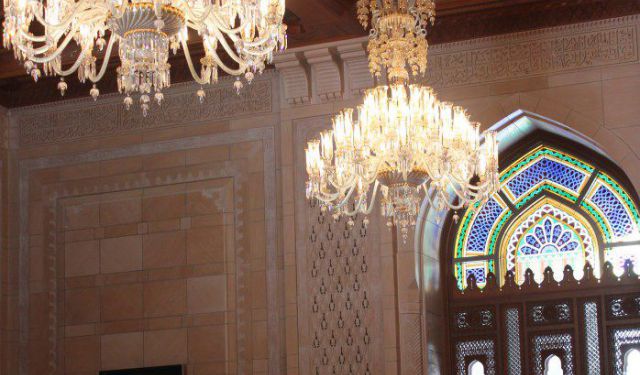 Getting Papped at the Grand Mosque, Muscat, Muscat, Oman (B)

To mark the 30th year of his reign, the ruler of Oman, Sultan Qaboos, ran a competition to design a mosque as his gift to the Omani people which he then named after himself. The end result is the Grand Mosque in the capital city, Muscat.

During our stay in Oman we went to explore the spectacular structure. It was just a ten-minute cab drive away from our hotel, The Chedi. As we walked up to the large mosque, its manicured grounds had numerous water features and beautiful gardens evoking a peaceful place of worship.

Built in 2001, the Grand Mosque sits in a walled compound with a minaret at each corner and a fifth, large minaret in the middle.

Before we even entered the mosque, our daughter, who was two at the time, was accosted by a group of Indonesians wanting to get a picture…we duly complied and she was papped like a celebrity! She was quite a hit!

The mosque can take up to 20,000 worshippers and, after seeing the main prayer hall, I could understand why. The huge, spacious area is decorated with intricate, Islamic decor. ...... (follow the instructions below for accessing the rest of this article).
This article is featured in the app "GPSmyCity: Walks in 1K+ Cities" on iTunes App Store and Google Play. You can download the app to your mobile device to read the article offline and create a self-guided walking tour to visit the attractions featured in this article. The app turns your mobile device into a personal tour guide and it works offline, so no data plan is needed when traveling abroad.