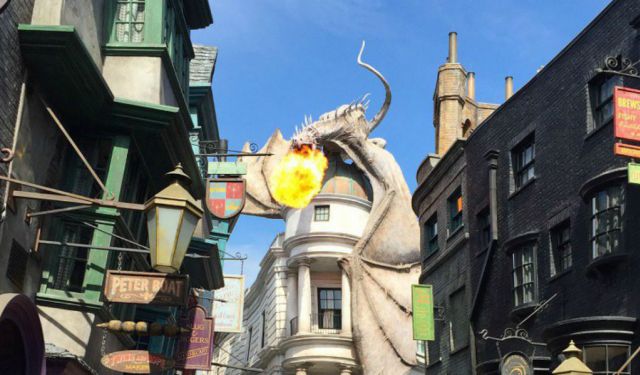 Getting the Most Out of the Wizarding World of Harry Potter, Orlando, Florida (B)

Outside of Mickey Mouse, one of the biggest draws to central Florida is boy wizard Harry Potter’s Wizarding World at Universal Studios and Islands of Adventures. For those of you unfamiliar with the attraction: no, it’s not its own park. The magical world of Harry Potter sprawls within two other Orlando theme parks, a clever move by the greedy minds of Universal, which means that to get full enjoyment of the attraction, you have to buy entrance to both Universal Studios and its neighbor, Islands of Adventures. Both of these parks are aging and unlike Disney, which is maintained in pristine condition every day of the year, the paint is a little faded in Marvel Superhero Island and Universal’s own version of Hollywood. As a result, the brand new Harry Potter areas in the parks have siphoned most of the crowds from every other part.

So what’s the best way to get the most out of the Wizarding World? First, get a pass that includes both parks. As I mentioned above, the Harry Potter section of the parks is divided between Islands and Universal. The older part of the park is Hogsmeade in Islands of Adventures. Hogsmeade is the wizarding village full of snow-capped cottages in the shadow of Hogwarts. This side of the park has the Hogwarts castle ride and the Dragon Challenge coaster. The new addition inside Universal Studios is Diagon Alley. Here you will find exact replicas of all the shops described in the books and seen in the movies where young wizards can buy their school supplies and where you can ride the Gringotts bank rollercoaster and catch the dragon sitting atop the bank breathing fire every 10 minutes. If you’re a Harry Potter fan, I guarantee you’re going to nerd out over every single thing at the Wizarding World, especially at Diagon Alley. ...... (follow the instructions below for accessing the rest of this article).
This article is featured in the app "GPSmyCity: Walks in 1K+ Cities" on iTunes App Store and Google Play. You can download the app to your mobile device to read the article offline and create a self-guided walking tour to visit the attractions featured in this article. The app turns your mobile device into a personal tour guide and it works offline, so no data plan is needed when traveling abroad.

Create Your Own Self-Guided Walks in Orlando
Guide Name: Getting the Most Out of the Wizarding World of Harry Potter
Guide Location: USA » Orlando
Guide Type: Self-guided Walking Tour (Article (B))
Author: Ana Montano
Read it on Author's Website: http://www.gnometrotting.com/getting-the-most-out-of-the-wizarding-world-of-harry-potter/
Sight(s) Featured in This Guide: