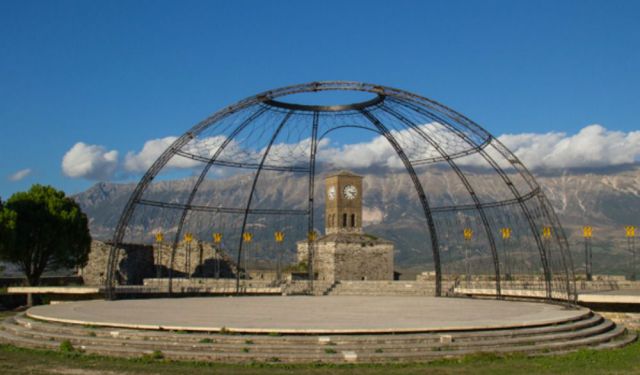 We arrived at Gjirokaster (also spelt Gjirokastra) in Albania mid-afternoon. The perfect time to explore this UNESCO world heritage site – in the cool of the day when golden rays from the sun enhanced the silvery grey stone of the buildings above and below us.

The original settlement, the Fortress of Argyro, was built on the summit of a hill overlooking a verdant valley in the Mali Gjerë mountains though which the Drinos River flows. It is one of the oldest cities of Albania. Its development has been influenced by the Greeks, Romans, Turks and Albanians. There are various theories surrounding the origin of its name. Maybe it comes from the name of the original fortress of Argyro which means Silver Fortress. But some claim it is because the grey buildings shimmer like silver when it rains – fortunately we did not have the opportunity to test this theory. It has also been christened the city of stone and the town of a thousand steps. Fortunately, we did not have to climb every one of them as we made our way up to Ali Pasha’s fortress that presides over the old town. Ali Pasha Tepelena is an Albanian hero and a prolific builder of castles during the nineteenth century. He followed an Albanian tradition that a man should build something for his loved one to express this emotion and Ali Pasha had seven wives. He extended the original fortress above Gjirokaster and added the clock tower. The fortress is affectionately known as Ali Pasha’s fortress. ...... (follow the instructions below for accessing the rest of this article).
This article is featured in the app "GPSmyCity: Walks in 1K+ Cities" on iTunes App Store and Google Play. You can download the app to your mobile device to read the article offline and create a self-guided walking tour to visit the attractions featured in this article. The app turns your mobile device into a personal tour guide and it works offline, so no data plan is needed when traveling abroad.