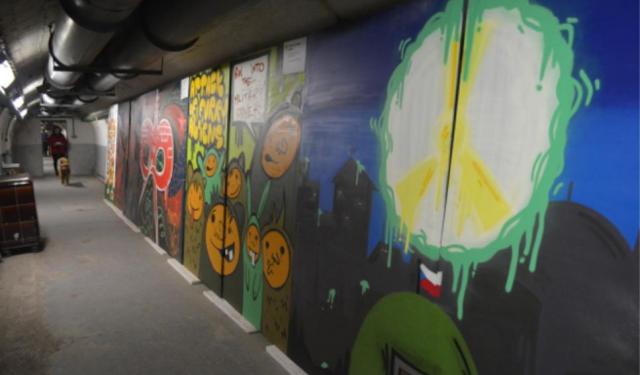 Go Underground on a Bomb Shelter Tour in Prague, Prague, Czech Republic (B)

Due to its long history of getting bombed by European and international aggressors, Prague equipped itself with hundreds of concrete bunkers that are fully functioning with electricity, water, and ventilation. Many of these bomb shelters were built in the 50’s during the Cold War and are designed to accommodate a large percentage of the people in Prague for up to 72 hours. You can visit one of them yourself on a guided tour of Folimanka Bunker.

The Folimanka Bunker was finished in 1962 and was run by the Czechoslovak army as a secret shelter. In 1994 after being inaccessible for years, it was passed to the city of Prague for administration. It’s been open to the public for monthly tours since 2014, as part functional shelter and part exhibition space.

Tours of the Folimanka bomb shelter are held by the city of Prague once a month, opening at 9 am and closing at 3 pm. The tours are completely free and self-guided. At the entrance of the bunker, there are maps that guide you around the massive underground labyrinth of tunnels and rooms. Each are numbered so you can identify the individual rooms and landmarks, which include ventilation rooms, bathrooms, and storage areas. ...... (follow the instructions below for accessing the rest of this article).
This article is featured in the app "GPSmyCity: Walks in 1K+ Cities" on iTunes App Store and Google Play. You can download the app to your mobile device to read the article offline and create a self-guided walking tour to visit the attractions featured in this article. The app turns your mobile device into a personal tour guide and it works offline, so no data plan is needed when traveling abroad.