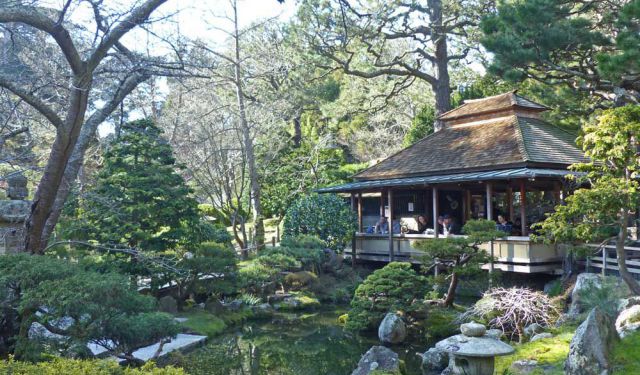 The links between San Francisco and Japan stretch back to the end of the 19th century, when the first emigrants arrived in the city. Today San Francisco has the largest remaining Japantown area in the US. And in 1957 it strengthened its relationship with Japan by adopting Osaka as a twin town. All of this makes San Francisco an excellent place to get a taste of Japanese heritage and culture.

We started in Japantown, where information boards mark out a short walk around the main sights, taking in a temple, churches and other community buildings. Each board details a different aspect of the area’s history, including education and religious life. I learnt a lot from this walk. Not just about the history and culture of the Japanese in San Francisco, but also about the troubled relationship between the immigrants and their host nation.

The first Japanese immigrants to the US arrived in San Francisco in the 1870s. Much of the early settlement was on the edge of the already settled Chinatown, but the community moved to the present location after the earthquake of 1906. Although they were keen to integrate into American society, the Japanese faced discriminatory attitudes and legislation, affecting where they lived and how their children were schooled. Matters were made worse during the Second World War, when a directive was issued requiring the internment of all people of Japanese descent living in the US. ...... (follow the instructions below for accessing the rest of this article).
This article is featured in the app "GPSmyCity: Walks in 1K+ Cities" on iTunes App Store and Google Play. You can download the app to your mobile device to read the article offline and create a self-guided walking tour to visit the attractions featured in this article. The app turns your mobile device into a personal tour guide and it works offline, so no data plan is needed when traveling abroad.