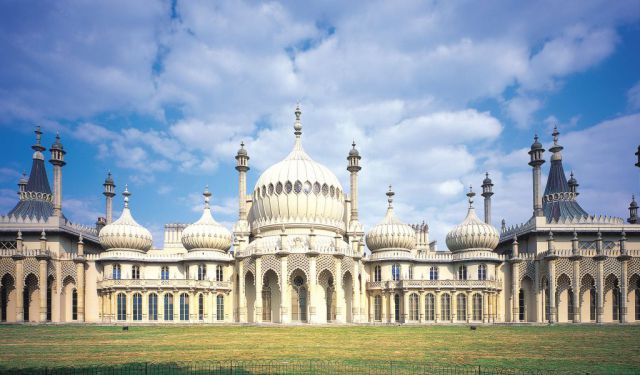 Going on a Dragon Hunt at the Royal Pavilion in Brighton, Brighton, England (B)

It was my 12-year-old who begged to go to the Royal Pavilion. He said it looked like it had been beamed down from another planet and he just had to see it. We were so glad he did. The Royal Pavilion is as extravagant and eccentric on the inside as it looks on the outside and we just loved it. What’s more, it is decorated with loads and loads of dragons so it’s the perfect place for a family dragon hunt.

The Royal Pavilion was built as a seaside retreat for George, Prince of Wales, in 1787. He wanted somewhere to escape from the confines of London and a discreet place to spend time with his mistress. George became Prince Regent in 1811 and continued to spend a lot of time in Brighton where he was known for his lavish entertaining and expensive tastes. The current appearance of the Pavilion with its Indian-style domes and minarets is the work of the architect, John Nash, who also designed Buckingham Palace.

As you walk into the Pavilion you are instantly struck by the bright colours on the walls and furnishings. There is nothing muted here, it’s all pinks, golds, greens, yellows and reds. Even the Entrance Hall is decorated with panels and banners of snakes and dragons. The whole theme is Oriental so while the exterior is Indian, all the interiors are influenced by the Chinese styles which were so fashionable in the Late Georgian era. ...... (follow the instructions below for accessing the rest of this article).
This article is featured in the app "GPSmyCity: Walks in 1K+ Cities" on iTunes App Store and Google Play. You can download the app to your mobile device to read the article offline and create a self-guided walking tour to visit the attractions featured in this article. The app turns your mobile device into a personal tour guide and it works offline, so no data plan is needed when traveling abroad.