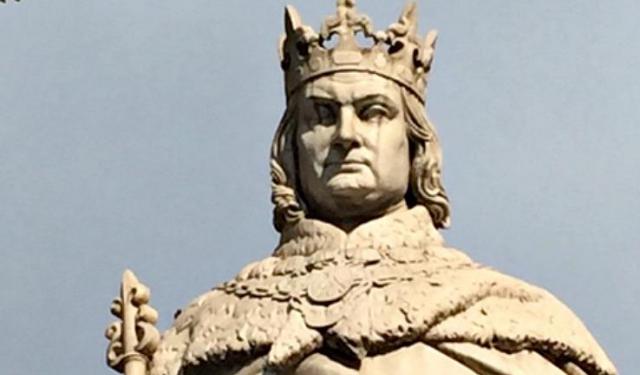 Aix-en-Provence is known as the city of 1,000 fountains. However, since the folks of this area have a reputation for exaggeration, we should probably take that with a grain of salt. The real number might be closer to 107… but still, they do have a lot of fountains.

One particular fountain caused quite a stir when it was unveiled in 1923. It was to be topped by a statue of a man who played a major role in the history of Aix and of Europe in the fifteenth century: he was called Good King René. Let’s learn a bit more about this intriguing character, then we’ll find out what all the fuss was about…

René of Anjou, also known as Good King René, was a very important man in his day. He had more titles than you could shake a stick at: he was the Count of Provence, Bar, Piedmont, and Guise; the Duke of Calabria, Lorraine, and Anjou; and the King of Hungary, Sicily, Aragon, Valencia, Majorca, Sardinia, and Jerusalem.

This multi-titled man played an important role in Europe and rubbed shoulders with the movers and shakers of the time, so let’s do a bit of name-dropping. René’s mother financed Joan of Arc’s campaign to save France, and René rode right alongside the Maid of Orléans. Christopher Columbus mentioned René as giving him his first commission as captain. And the Good King is said to have inspired Cosimo de’ Medici to collect manuscripts from around the world and open the first public library, San Marco, in Florence. ...... (follow the instructions below for accessing the rest of this article).
This article is featured in the app "GPSmyCity: Walks in 1K+ Cities" on iTunes App Store and Google Play. You can download the app to your mobile device to read the article offline and create a self-guided walking tour to visit the attractions featured in this article. The app turns your mobile device into a personal tour guide and it works offline, so no data plan is needed when traveling abroad.