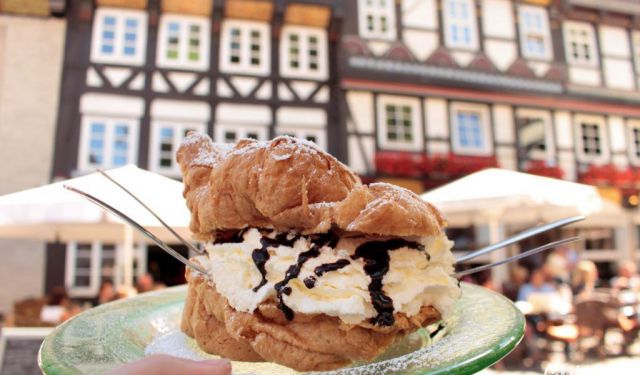 Goslar: A Quintessential Half-timbered Town in the Harz, Goslar, Germany (B)

At the foot of the Harz mountains just over the border in Lower Saxony, not far from Quedlinburg and Wernigerode, is yet another town with 1,800 half-timbered houses, the epitome of adorable. One of Germany’s hidden treasures with an imperial past whose wealth came from the surrounding zinc, copper and silver mines. The town has remained practically unchanged, making it a must-see UNESCO World Heritage Site.

Upon the discovery of silver in the 10th century, the little hamlet of Goslar was transformed into one of Northern Europe’s leading medieval towns beloved by emperors and popes for its deep coffers, acquiring the nickname “the treasure chest of the North”. Less than a hundred years later, the town would become the seat of the Holy Roman Emperors of Germany for the next 300 years. By 1532, the neighboring duke of Braunschweig-Wolfenbüttel had snatched the mine. Eventually the town’s funds dried up and lead to the halt of the town’s growth, therefore, preserving it’s captivating medieval Altstadt. During the Second World War, a POW camp was formed here, which also helped to spare the town from any damage.  ...... (follow the instructions below for accessing the rest of this article).
This article is featured in the app "GPSmyCity: Walks in 1K+ Cities" on iTunes App Store and Google Play. You can download the app to your mobile device to read the article offline and create a self-guided walking tour to visit the attractions featured in this article. The app turns your mobile device into a personal tour guide and it works offline, so no data plan is needed when traveling abroad.