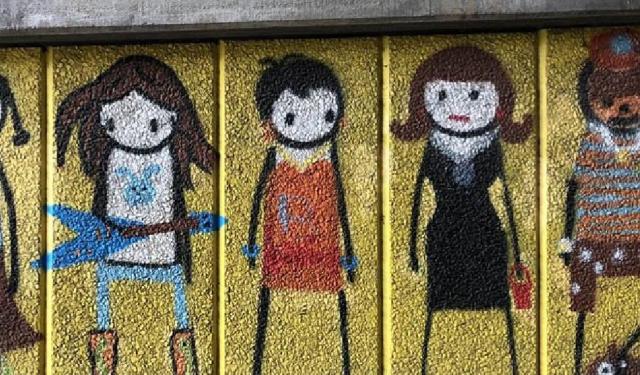 Graffiti and Mosaics: Street Art of the South Bank, London, London, England (B)

Exploring the street art is just one of many unique things to do in London. The art is everywhere: vibrant graffiti, colourful murals and even carefully crafted mosaics. You’ll find it on the sides on buildings, on old walls, and beneath once-neglected railway arches. I spent some time exploring the street art of the South Bank, some of it ever-changing, and some more permanent.

Probably the best place to start is at the Waterloo Graffiti Tunnel (also known as the Leake Street Arches). Previously a rather dismal series of arches beneath the railway line, the tunnel has now been revitalised as a shopping and entertainment area, with London’s longest graffiti wall.

Every available space (including the ceiling) is covered with paintings and slogans. The scene changes regularly, as new images are piled on old. As I walked through the tunnel – trains rumbling overhead – I saw some people adding to paintings, and others videoing a short dance sequence with a backdrop of colourful graffiti. ...... (follow the instructions below for accessing the rest of this article).
This article is featured in the app "GPSmyCity: Walks in 1K+ Cities" on iTunes App Store and Google Play. You can download the app to your mobile device to read the article offline and create a self-guided walking tour to visit the attractions featured in this article. The app turns your mobile device into a personal tour guide and it works offline, so no data plan is needed when traveling abroad.