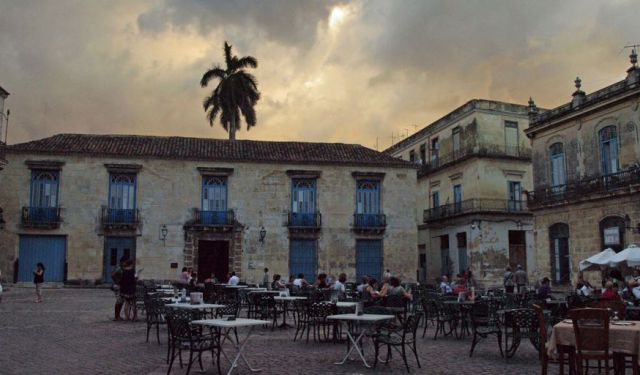 One of the things that make Havana a lovely place to just wander around is that it has many plazas. One of the plazas is the Plaza de la Catedral in Old Havana. It doesn’t look it now, but the plaza was once the site of a swamp. For some reason, plans to build a plaza went ahead and the area was drained. However, during the rainy season each year, water levels rose and the swamp tried its best to make a comeback…so much so, the original name of the plaza was apparently Plaza de la Ciénaga (Swamp Square). Eventually, it was properly drained and it was then used as a naval dockyard. But by 1727, dockyards weren’t sexy anymore so plans for a cathedral and various mansions were implemented. Today, there are many things to be found in this plaza, including the historical buildings, restaurants, and the cathedral.

The main site to see in this Plaza is the Cathedral of The Virgin Mary of the Immaculate Conception. What sets it apart from other Baroque cathedrals found in colonial countries is that the building was constructed out of coral rock removed from the Gulf of Mexico. The coral rock makes for a cool texture to the building and because it is ocean floor, apparently one can find the remains of marine life in it! I wasn’t lucky enough to find any, but you should take a look! ...... (follow the instructions below for accessing the rest of this article).
This article is featured in the app "GPSmyCity: Walks in 1K+ Cities" on iTunes App Store and Google Play. You can download the app to your mobile device to read the article offline and create a self-guided walking tour to visit the attractions featured in this article. The app turns your mobile device into a personal tour guide and it works offline, so no data plan is needed when traveling abroad.