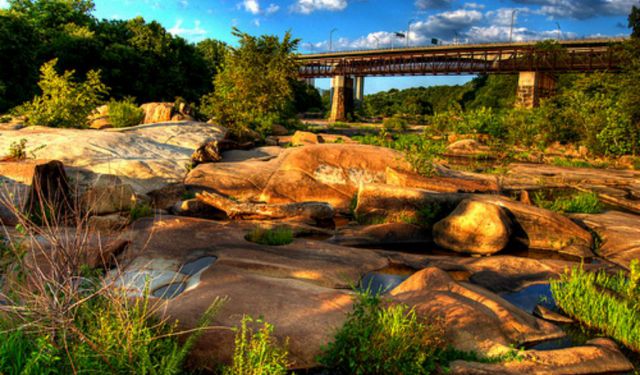 At over 400 years old, Richmond is one of America’s oldest cities. Within the city, there are many historic sites to explore, such as the Edgar Allan Poe House Museum and the Virginia Capitol Building. After visiting Richmond’s main attractions, travelers may be left thinking, “what’s next?” This insider guide will reveal some of Richmond’s best hidden gems and travel oddities.

For over 25 years, Connecticut the American Indian has kept a watchful eye over Richmond’s residents. In the early 1980s, local artist Paul Di Pasquale created the 10-foot-tall statue as a tribute to the area’s Native American community. Connecticut spent most of his days as a mascot at The Diamond, home of the Richmond Braves. However, when the Triple-A baseball team moved out of Richmond, Connecticut needed a new home. He now sits perched above the old Lucky Strike tobacco factory, where he gazes over the James River.

Outside the Science Museum of Virginia, visitors can get a hands-on look at a floating sphere sculpture called a kugel. The scientific marvel is nine feet in diameter and weighs 29 tons, but visitors can easily move it with a swipe of a finger. Several of these levitating sculptures exist around the world, although Richmond has the largest one ever constructed. ...... (follow the instructions below for accessing the rest of this article).
Image Courtesy of Taber Andrew Bain.
This article is featured in the app "GPSmyCity: Walks in 1K+ Cities" on iTunes App Store and Google Play. You can download the app to your mobile device to read the article offline and create a self-guided walking tour to visit the attractions featured in this article. The app turns your mobile device into a personal tour guide and it works offline, so no data plan is needed when traveling abroad.