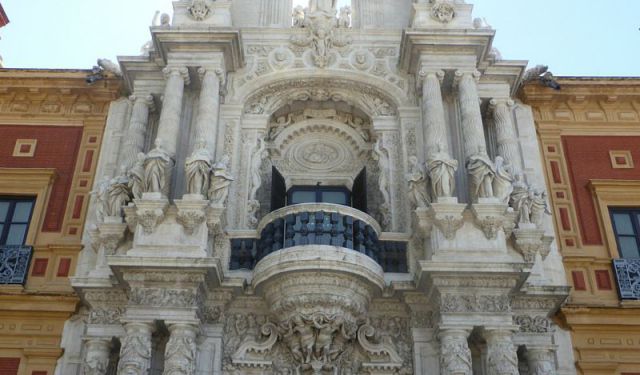 The tour started in Plaza Nueva near the Ayuntamiento (Town Hall) at 10am. You can’t miss the guides from FreeTourSevilla – the yellow umbrella is up and waiting for you. Our guide Miguel was passionate about Seville!

After a few minutes wait, we were off and the first place was where we were standing right in the centre of the Plaza there is a statue dedicated to King Fernando III who reconquered the city from the Moors in 1248. Between 1270 and 1840 the Plaza was occupied by the Convento Casa Grande de San Francisco. The Plaza is a new square (hence Plaza Nueva) only 150 years old, whereas most of the buildings in Seville were constructed during the 16, 17 and 18th centuries.

The Ayuntamiento (Town Hall) took 30 years to build from 1526 to 1556 under the direction of Diego de Riano. It was built on the remains of the former San Francisco Monastery. There is a legend around the archway of the Ayuntamiento; if you walk underneath the archway you will never get married. Miguel walks through the archway every day and he informs us with a laugh that he is still not married, maybe there is some truth to this legend. The Town Hall is used today for weddings and formal receptions, it is where the City Mayor has his office. It is also the place where demonstrations are held and today was no different, as we arrived a large, noisy demonstration was taking place. ...... (follow the instructions below for accessing the rest of this article).
This article is featured in the app "GPSmyCity: Walks in 1K+ Cities" on iTunes App Store and Google Play. You can download the app to your mobile device to read the article offline and create a self-guided walking tour to visit the attractions featured in this article. The app turns your mobile device into a personal tour guide and it works offline, so no data plan is needed when traveling abroad.