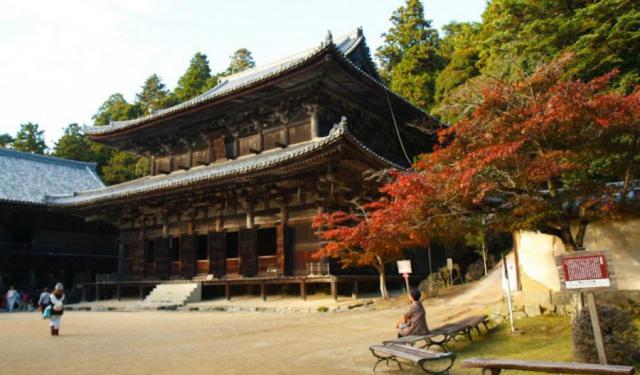 Our stop was announced and I said my goodbye to my seatmate, Mr Yamamoto. My friends and I shuffled along the aisle to the door, ready to jump out of the shinkansen and storm Himeji Castle and Engyoji Temple.

We exited the JR Himeji Station and saw buildings converging towards Himeji Castle straight ahead. We decided to walk to the castle instead of taking the loop bus which would have transported us to Himeji Castle in just 5 minutes (fare is 100 yen). The walk would have taken 15 minutes but it took us more than that—we were walking slowly, enjoying the city scene and the sculptures along the way.

Directions to Himeji-jo: From Himeji Station, take the loop bus to Himeji Castle (5 minutes, 100 yen). Or walk from the station along Otomae-dori (Otomae Street) to the castle (15 minutes).

We crossed the moat via a bridge that led to Otemon Gate where gatekeepers barred our entry. We shot them with our cameras and they surrendered, letting us through. Once inside the castle grounds, we saw that the area is huge and we made a beeline to the largest gate in the castle, Hishinomon (Diamond Gate), where we paid the fee to get inside the majestic 17th century Himeji Castle (aka Shirasagi-jo or White Heron Castle) that has never been destroyed by wars, earthquakes or fires. ...... (follow the instructions below for accessing the rest of this article).
This article is featured in the app "GPSmyCity: Walks in 1K+ Cities" on iTunes App Store and Google Play. You can download the app to your mobile device to read the article offline and create a self-guided walking tour to visit the attractions featured in this article. The app turns your mobile device into a personal tour guide and it works offline, so no data plan is needed when traveling abroad.