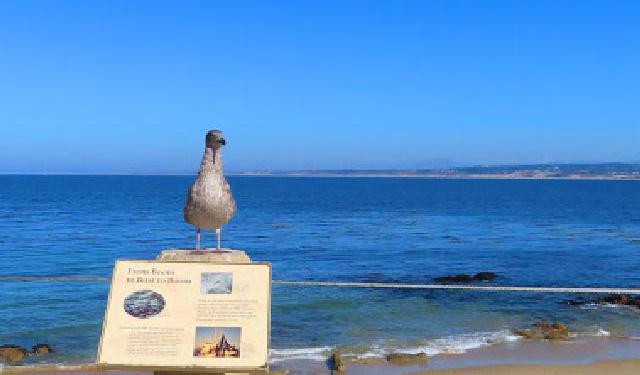 When you're ready, continue walking straight along the trail and at the crosswalk, which is decorated with a blue wave pattern, carefully cross the street. On the other side of the street, turn left and continue walking toward the bronze bust and railroad crossing sign.

Have a seat on the bench facing the Ed Ricketts memorial bust. This is the site of a devastating accident that occurred on the evening of May 8, 1948.

Beloved Cannery Row resident Ed Ricketts was driving his old 1936 Buick, which he had purchased in 1947. It stalled on the railroad crossing at Drake Avenue and Wave Street. For some reason Ed continued to try and restart the stalled engine while his car sat on the tracks. The Del Monte Express, a Southern Pacific passenger train that was on its way to San Francisco, hit Ed and the car and pushed them several hundred feet down the track before the train was able to stop. Ed died of his injuries three days later.

Ed was nearly 51 years old. John Steinbeck who was devastated by the death of his friend, wrote, “There dies the greatest man I have known and the best teacher. It is going to take a long time to reorganize my thinking and planning without him.” The Del Monte Express ran until 1971 and the railroad tracks were removed in the 1980s to make the Monterey Bay Recreation Trail. But, the legend of Ed Ricketts lives on. ...... (follow the instructions below for accessing the rest of this article).
This article is featured in the app "GPSmyCity: Walks in 1K+ Cities" on iTunes App Store and Google Play. You can download the app to your mobile device to read the article offline and create a self-guided walking tour to visit the attractions featured in this article. The app turns your mobile device into a personal tour guide and it works offline, so no data plan is needed when traveling abroad.