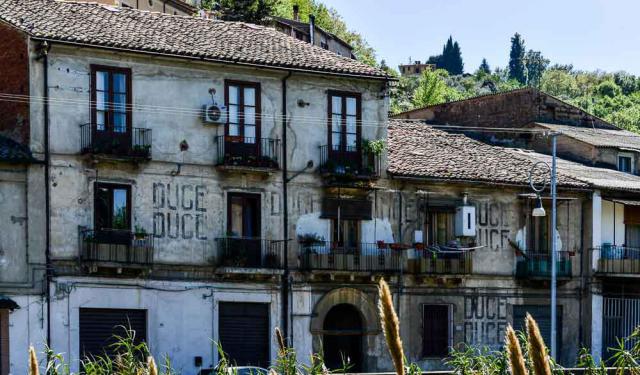 Want to come on a historic walk in one of Italy’s captivating southern cities: Cosenza, Calabria? An impromptu invitation to go on a historic walk today around Cosenza, proved to be both educational and loads of fun. It’s especially cool when joining a friend that’s been living in Cosenza for an age, Luigina from Calabrisella Mia Blog on the walk.

Today is the 25th April, so it’s Liberation Day in Italy, which celebrates the end of Nazi Occupation in Italy and the Italian Civil War, during World War II. And what better way to spend a public holiday than by exploring the Fascist buildings around Cosenza, followed by a search for the illusive La Ficuzza (fig tree) along the way?

Because of Cosenza’s rich artistic and historical heritage, the city is known as the “Athens of Italy”. Founded in 1511–12 the Accademia Cosentina, which promotes scientists, artists, and culture, is said to be one of the oldest in Europe. There is so much to see in Cosenza that you need more than one day to see everything. ...... (follow the instructions below for accessing the rest of this article).
This article is featured in the app "GPSmyCity: Walks in 1K+ Cities" on iTunes App Store and Google Play. You can download the app to your mobile device to read the article offline and create a self-guided walking tour to visit the attractions featured in this article. The app turns your mobile device into a personal tour guide and it works offline, so no data plan is needed when traveling abroad.