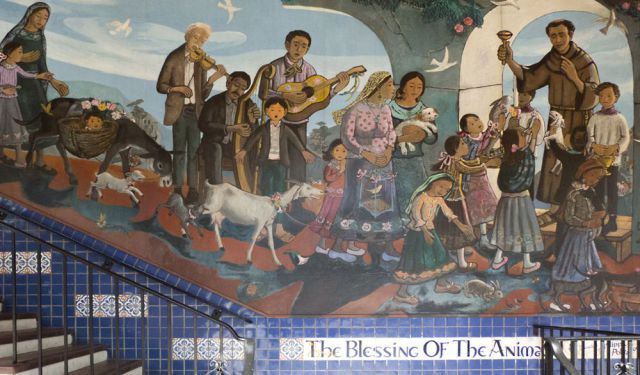 One of the things I love about California is the profusion of different cultures: Chinese, Japanese and, of course, Mexican. I also take a perverse delight in ferreting out historical sites among the glass and concrete of the gleaming modern cities. So it’s no surprise that, on a return visit to Los Angeles, the first place I headed to was El Pueblo de Los Angeles. This is a thriving Mexican enclave and the oldest part of the city, packed full with historic buildings.

El Pueblo de Los Angeles dates back to the 18th century. The Spanish had started to colonise Alta California and in 1781 King Carlos III sent instructions that a new pueblo (town) was to be established in the area that is now Los Angeles. The story goes that eleven families congregated at the nearby San Gabriel Mission and marched to the new site accompanied by two priests and a military escort.

Each family was given a plot of land to work and it was not long before other settlers came to join them and the town began to grow. The heart of the new settlement was Wine Street, known today as Olvera Street. Light industry soon developed here, along with houses, shops and restaurants, some of which still survive today. ...... (follow the instructions below for accessing the rest of this article).
This article is featured in the app "GPSmyCity: Walks in 1K+ Cities" on iTunes App Store and Google Play. You can download the app to your mobile device to read the article offline and create a self-guided walking tour to visit the attractions featured in this article. The app turns your mobile device into a personal tour guide and it works offline, so no data plan is needed when traveling abroad.