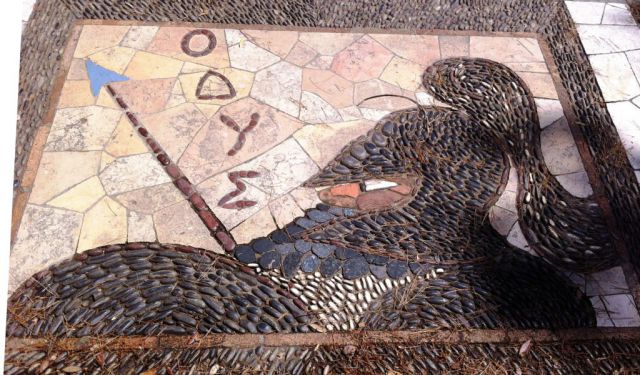 If it’s been a while since you’ve read the Greek classics (or if you just never got around to it) no worries! There’s no need to pull out the books. In Nice, France you can take a quick 13-step refresher course on a hilltop overlooking the sea, the city, and the port. This lovely park is called the Colline du Chateau or “Castle Hill” and on the port side, you will find a short flight of stairs decorated with mosaics giving a quick review of Homer’s Odyssey.

You might wonder what all this “Greekness” has to do with Nice, France. Well quite a bit, actually. The Greeks settled on this very hilltop around the fourth century BC and called it Nikaia after the goddess of victory (the same one the Nike sports shoe is named after) and the name eventually evolved into Nice.

In the 1960s when the city was renovating the park they decided to add mosaics with a Greek theme as a nod to this hilltop’s Greek heritage. The results are lovely and you will see many mosaics scattered around the park, but for now let’s start on our own little odyssey. ...... (follow the instructions below for accessing the rest of this article).
This article is featured in the app "GPSmyCity: Walks in 1K+ Cities" on iTunes App Store and Google Play. You can download the app to your mobile device to read the article offline and create a self-guided walking tour to visit the attractions featured in this article. The app turns your mobile device into a personal tour guide and it works offline, so no data plan is needed when traveling abroad.