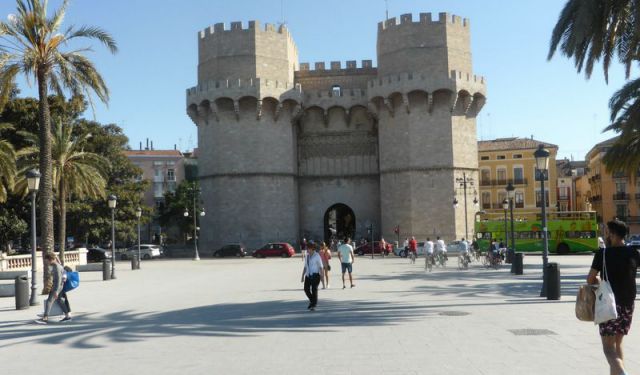 How to Enjoy a Valencia Emblematic Free Walking Tour, Valencia, Spain (B)

A Valencia Emblematic Free Walking Tour should be on everyone’s ‘to do’ list when visiting Valencia in Spain.

This tour will take you to areas that are less known and off the usual tourist path. The guides are extremely knowledgeable and passionate about Valencia. They have some great stories to tell, so we won’t spoil your fun here by telling you about all their little ‘gems’.

Ensure you are at the meeting point at the Plaza de la Virgin at least 10 minutes before the tour starts.

Located in the meeting place for the tour – Plaza de la Virgin – is the roman symbol of Valencia – the Cornucopia. A cornucopia symbolises plenty and abundance. Don’t be like us and not look down when you are walking around the city, we must have walked past it a dozen times before realising it was there.

The Palace of the Borgia Family located at Carrer del Duc Alfons el Vell, is also known as Palacio de las Cortes which was built for the Borgia family by the Dukes of Gandia in 1492. Alexander Borgia became the first Spanish Pope – he was known as Pope Alexander VI. The Palace is quite narrow and was used more as a Valencian Royal Court as the family moved to Rome. ...... (follow the instructions below for accessing the rest of this article).
This article is featured in the app "GPSmyCity: Walks in 1K+ Cities" on iTunes App Store and Google Play. You can download the app to your mobile device to read the article offline and create a self-guided walking tour to visit the attractions featured in this article. The app turns your mobile device into a personal tour guide and it works offline, so no data plan is needed when traveling abroad.