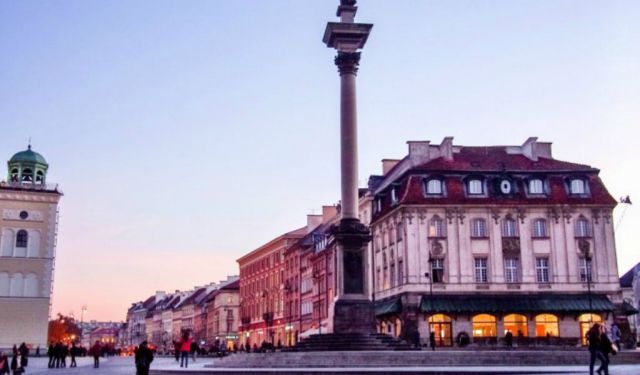 How to Spend 24 Hours in Warsaw, Warsaw, Poland (B)

Warsaw was a happy addition to my recent trip to Europe, but a short one. Thankfully its compact size and ease of getting around made its highlights accessible. With only 24 hours in Warsaw to spend I looked to cover as much ground as possible. Here’s how it went:

My 24 hours in Warsaw began at the city’s most dominating feature, the Palace of Culture and Science. This massive Soviet era tower was once the tallest building in Europe, all because Stalin wanted it to be. The iconic building once held theatres, universities, a Rolling Stones concert (the first behind the Iron Curtain by a western band) and rodent patrolling cats. Beyond that and since the day it was built, much of the building remains vacant. Tours are available which brings you through the grand hallways and inside the Congress Hall. Visitors can take in amazing views from the observation deck which was a highlight from my 24 hours in Warsaw. Oh, and if you visit in the summertime you just might get a glimpse of one of the oldest residents. Much like the 6-toed cats of the Hemingway House in Key West, the descendants of those Polish felines are still around today. ...... (follow the instructions below for accessing the rest of this article).
This article is featured in the app "GPSmyCity: Walks in 1K+ Cities" on iTunes App Store and Google Play. You can download the app to your mobile device to read the article offline and create a self-guided walking tour to visit the attractions featured in this article. The app turns your mobile device into a personal tour guide and it works offline, so no data plan is needed when traveling abroad.