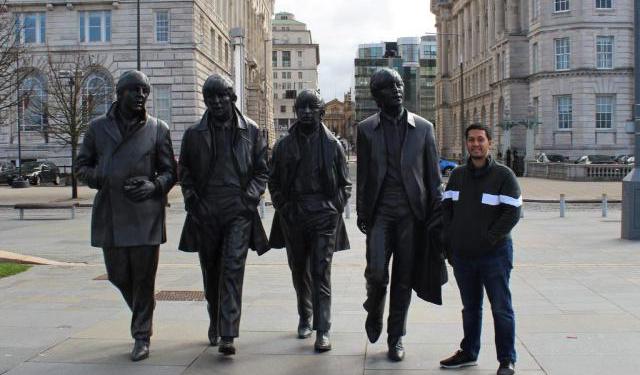 Liverpool is a famous port city that played a big part in the Industrial Revolution. Liverpool acted as the gateway to all the raw materials (and unfortunately slaves) required by the factories of Manchester. The interdependence between the two cities led to the development of the first commercial railway line and the construction of the Manchester Ship Canal, which were both revolutionary at that time.

Today, Liverpool has moved on from its maritime past but still celebrated by the rejuvenated Albert Dock and Pier Head. Liverpool also holds sway as one of the cultural capitals of the world by being the birthplace of The Beatles and Liverpool F.C. After spending four satisfying days in Manchester, we took the Northern Train to Liverpool mainly to tick-off another item in my bucket list – to live and breathe in the same air as “The Fab Four.”

We arrived at Lime Street Station in the afternoon and had a quick Italian lunch at Liverpool ONE. We then strolled to Royal Albert Dock, a complex of docks and warehouses built in 1846 initially to store precious cargoes and goods. After the second World War, the dock went into decline before the city decided to revitalize it into a cultural and lifestyle hub from the mid 1980’s. Today, Royal Albert Dock is part of the UNESCO World Heritage Maritime Mercantile City hosting a number of cafes, museums and events. ...... (follow the instructions below for accessing the rest of this article).
This article is featured in the app "GPSmyCity: Walks in 1K+ Cities" on iTunes App Store and Google Play. You can download the app to your mobile device to read the article offline and create a self-guided walking tour to visit the attractions featured in this article. The app turns your mobile device into a personal tour guide and it works offline, so no data plan is needed when traveling abroad.