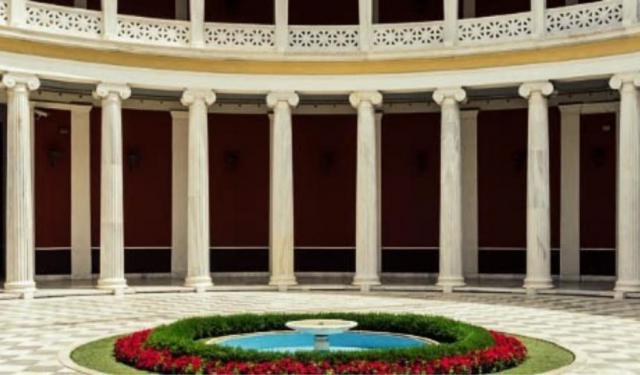 Important Buildings and Parks in Athens, Athens, Greece (B)

On this page of the free Athens travel guide, you can discover Athens important buildings which you will definitely pass by during your stay in the Greek Capital. You’ll also discover two of the most beautiful parks in Athens!

- visiting information including opening times, ticket prices, address and map location, telephone if available, and details on how to get there using public transport.

The archaeological excavations performed in front of the Athens City Hall have revealed an area found right by the old city walls.

Raised in 1842 as the palace of King Otto, the first king of Greece, the building became the headquarters of the Parliament in 1926. The transition wasn’t that smooth, as during the housing shortage of 1923, it was a shelter for the poor. The building has a beautiful library, which you should visit.

Sculpted in 1930 on the wall in front of the Parliament’s building, it depicts a dying soldier. The monument was done in the memory of all Greek citizens which have died during times of war, from the moment the Greeks won their independence to this day. ...... (follow the instructions below for accessing the rest of this article).
This article is featured in the app "GPSmyCity: Walks in 1K+ Cities" on iTunes App Store and Google Play. You can download the app to your mobile device to read the article offline and create a self-guided walking tour to visit the attractions featured in this article. The app turns your mobile device into a personal tour guide and it works offline, so no data plan is needed when traveling abroad.