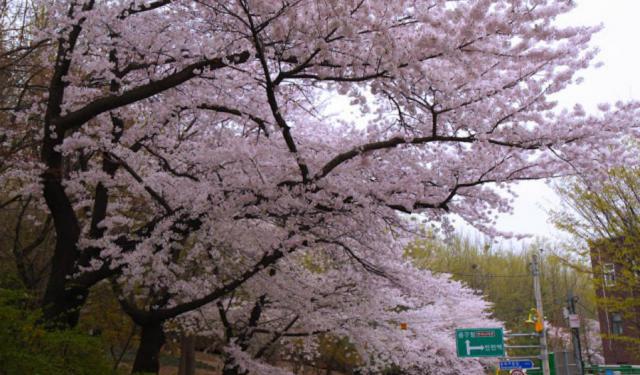 Having arrived at the very tail end of the cherry blossom season, the first order upon arrival—nevermind not having had any sleep for more than 24 hours—was to go to Incheon, in the hopes of gazing at cherry blossom petals on branches and not on the ground.

I was in South Korea, why would I want to go see China? I did not want to, but I had to. From Incheon Station, there was no other way to get to Songwoldong Fairy Tale Village and Jayu Park, but through Chinatown.

Walking the uphill main road of Chinatown, I followed my nose and turned right to a street lined with many different shops and stalls selling so many unfamiliar food. I wanted to try everything! But my common sense, budget, and stomach were all in agreement: No! Just two or three. The woes of traveling alone.

So Many Delicious Smells Wafting from Every Direction, but These Are the Must Try Ones When in Chinatown:

- Gonggalppang – The name means "empty bread". These are large, sweet, round, and hollow baked crisps. After trying a piece or two (okay, maybe three) from the free taste bowl, I wanted to buy one gonggalppang....but it was sold in bags of five to eight! ...... (follow the instructions below for accessing the rest of this article).
This article is featured in the app "GPSmyCity: Walks in 1K+ Cities" on iTunes App Store and Google Play. You can download the app to your mobile device to read the article offline and create a self-guided walking tour to visit the attractions featured in this article. The app turns your mobile device into a personal tour guide and it works offline, so no data plan is needed when traveling abroad.