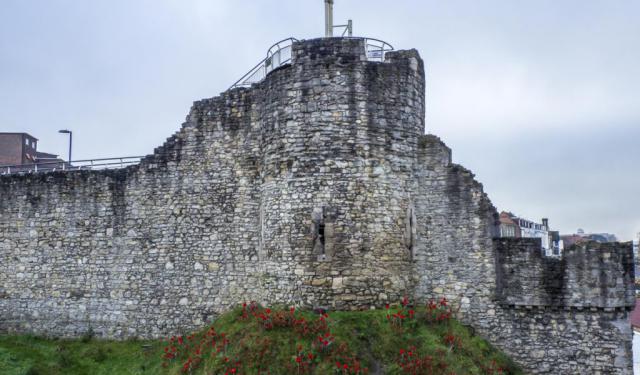 I visited Southampton because I was curious about its latest attraction, Gods House Tower. Not only did I find an innovative mixture of art and culture at this tower but enjoyed some other very pleasant surprises. The Pig in the Wall is probably the most inviting hotel I have ever stayed in and Southampton Old Town was a delight to explore.

For many Southampton in Hampshire, England is simply a cruise terminal. But, just a short distance from its massive port, visitors will find a wealth of history and culture in Southampton’s Old Town. As my hotel was actually a part of the old walls and appropriately named The Pig in the Wall I started my day strolling along the Western Esplanade. During the middle ages the walls to my right were actually on the sea front. When doctors prescribed salt water bathing as a cure for many illnesses Southampton became a fashionable place to visit from the mid-eighteenth century. This area, at the end of Simnel Street, was home to Mr Martin’s Baths and the Assembly Rooms. The latter provided evening entertainment including dancing and card games for visitors to the town. In those days Southampton Castle would have towered above the defensive walls. ...... (follow the instructions below for accessing the rest of this article).
This article is featured in the app "GPSmyCity: Walks in 1K+ Cities" on iTunes App Store and Google Play. You can download the app to your mobile device to read the article offline and create a self-guided walking tour to visit the attractions featured in this article. The app turns your mobile device into a personal tour guide and it works offline, so no data plan is needed when traveling abroad.