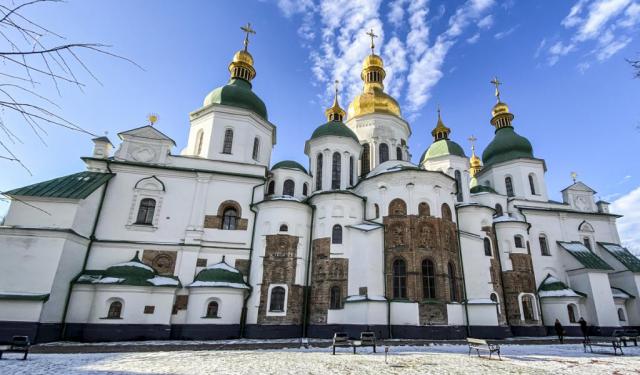 I have long admired the opulent architecture of the Orthodox Church but had failed to appreciate the symbolism of the domes that dominate its religious buildings until I spent some time in Kiev, famous for its historic places of worship.

The dome as an architectural feature was developed by the Romans as long ago as the fifth century. In most religions buildings it has since been replaced by easier techniques such as vaulting. However, in Kiev the capital of the Ukraine the dome reigns supreme. Despite its fall from grace in other countries it has been a significant feature of Ukrainian Baroque architecture that emerged during the ninth century and lasted until the end of the seventeenth century. An excellent example of Ukrainian Baroque church architecture is the Cathedral of Saint Sophia.

Built during the eleventh century Saint Sophia’s Cathedral became the centre of Christianity in Kiev. Listed by UNESCO on its World Heritage List it is the best preserved ancient Christian church in the Ukraine and beyond. It is dedicated to Sophia the Saint of Wisdom who is identified with the emergence of the new Orthodox Christian religion at the time the cathedral was built. This fabulous building is topped by one large golden dome and six green domes. These domes are pear-shaped, a variety of the more common onion dome that developed in the Ukraine. Colours are symbolic in the Orthodox Church. Gold signifies the light of God and his divine nature. Green represents the Holy Spirit, the natural world and new life. ...... (follow the instructions below for accessing the rest of this article).
This article is featured in the app "GPSmyCity: Walks in 1K+ Cities" on iTunes App Store and Google Play. You can download the app to your mobile device to read the article offline and create a self-guided walking tour to visit the attractions featured in this article. The app turns your mobile device into a personal tour guide and it works offline, so no data plan is needed when traveling abroad.