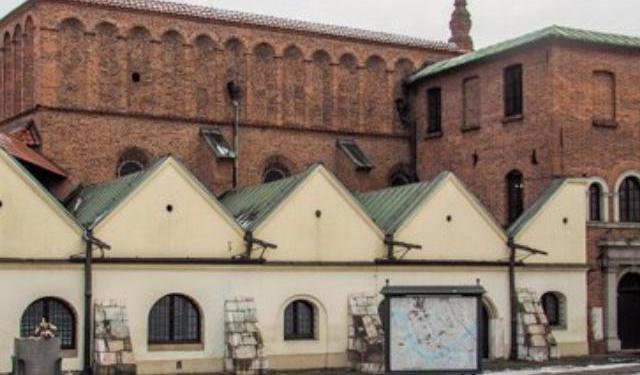 While it is easy to simply google “free walking tours in Krakow”, I recently came across an app called freetour.com. It is great! I typed in Krakow and found a walking tour of Krakow’s Jewish Quarter and one of Krakow’s Old Town.

Today I joined the tour for Krakow’s Jewish Quarter. The English-speaking tour met at in front of St. Mary’s Basilica in Old Town at 2:30pm. Given it was winter time and dark very early, the tour was two hours rather than the advertised two and half hours. That was fine with me.

From the church we walked to Krakow’s Jewish Quarter, also called Kazimierz. Our first stop was at the Old Synagogue. The Old Synagogue is the oldest synagogue still standing in Poland. It was very important to the Jewish community prior to the invasion of the Germans during World War II. It’s thick masonry walls and heavy buttressing are examples of a rare Polish Fortress Synagogue.

The Germans ransacked the building and then used it for ammunition storage. In addition, the Germans executed 30 Polish prisoners at its wall. Due to blood being at the scene, the building is not kosher, and no services were ever resumed. Today the synagogue operates as a museum.  ...... (follow the instructions below for accessing the rest of this article).
This article is featured in the app "GPSmyCity: Walks in 1K+ Cities" on iTunes App Store and Google Play. You can download the app to your mobile device to read the article offline and create a self-guided walking tour to visit the attractions featured in this article. The app turns your mobile device into a personal tour guide and it works offline, so no data plan is needed when traveling abroad.