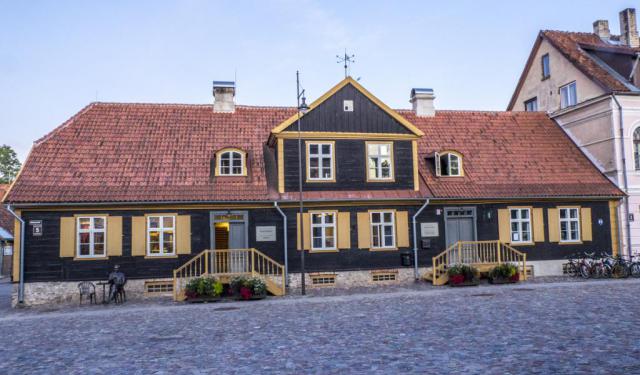 Kuldiga in Latvia and its Seventeenth Century Showcase, Kuldiga, Latvia (B)

Originally a German Dukedom and later a Soviet state Kuldīga is now blossoming as it builds its own unique identity through the sensitive restoration of its beautiful old buildings.

This diverse heritage is reflected in three beautiful churches of three different denominations, Lutheran, Catholic and Russian Orthodox. Walk with me through the narrow streets of the old town down to the banks of the Venta River and the Ventas Rumba, the widest waterfall in Europe. On my way I crossed several bridges that span the Alekšupīte River. This small river is part of the fabric of the old town.

Two rivers run through the town of Kuldīga a small town in the Kurzeme region of Latvia. The Venta River flows by the old town whereas the smaller Alekšupīte River runs through its centre, lapping at the walls of the buildings it flows past.

This Alekšupīte River is only eight kilometres long and on its course through the town it is crossed by nine bridges. When people get married here it is considered lucky to cross seven of these bridges. An annual race takes place every July when the contestants run along the river bed. ...... (follow the instructions below for accessing the rest of this article).
This article is featured in the app "GPSmyCity: Walks in 1K+ Cities" on iTunes App Store and Google Play. You can download the app to your mobile device to read the article offline and create a self-guided walking tour to visit the attractions featured in this article. The app turns your mobile device into a personal tour guide and it works offline, so no data plan is needed when traveling abroad.