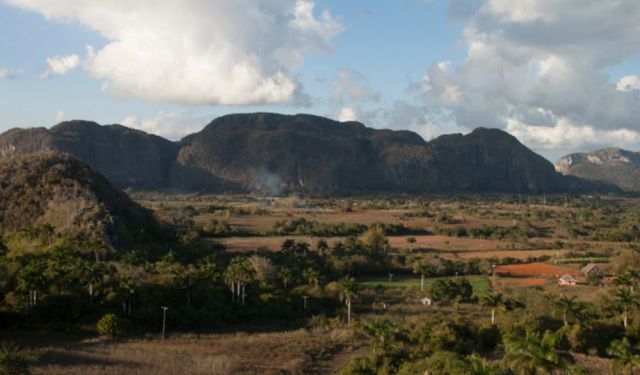 Las Terrazas and Vinales… A Treat for Nature Lovers, Vinales, Cuba (B)

We ate our final breakfast at Casa Obrapía before loading on the bus to drive west for 1.5 hours to Las Terrazas, a very interesting community. A reforestation project was designed around the community which provided countless jobs and government housing to many. The hills, once full of trees were left almost barren after timber logging by the Spanish and Cubans, and coffee planting by the French. Only 14% of the forest remained in 1957. A 12,000 acre reserve was created in the Sierra del Rosario Mountains where trees were replanted and in 1984 it was named a biosphere Reserve by UNESCO.

The number of families who lived in the area has grown from 171 to 1,014 since the project was initiated. Now its number one source of income is from tourism. The community, which is almost like a commune, operates a movie theater, disco club, library, coffee shop, and Cuban ration store. Those who work for the government project receive their salary as normal, and the money earned by the community is divvied up, most of it being returned to the state. Las Terrazas plants an organic garden, produces 30 tons of honey, offers several guided hikes and ziplining tours, has an in house veterinarian, and is a haven for birdwatchers who can stay at the Hotel Moka, where we ate lunch. ...... (follow the instructions below for accessing the rest of this article).
This article is featured in the app "GPSmyCity: Walks in 1K+ Cities" on iTunes App Store and Google Play. You can download the app to your mobile device to read the article offline and create a self-guided walking tour to visit the attractions featured in this article. The app turns your mobile device into a personal tour guide and it works offline, so no data plan is needed when traveling abroad.