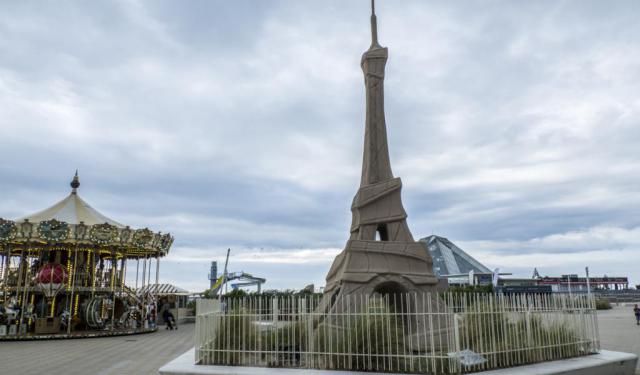 Le Touquet Resplendent in the Pines of the Cote d'Opale, Le Touquet, France (B)

Lighthouses are generally found in isolated places warning of treacherous seas. Le Touquet has a lighthouse in the middle of town. Just one of the many eccentricities to delight and entertain its visitors.

The view from the top of the lighthouse is magnificent. Le Touquet is laid out like a patchwork quilt below. A collage of forest, beach dunes and a natural estuary surrounding a suburb of elegant buildings.

I had approached Le Touquet along the Avenue du Golf. The town is famous for its golf courses and its gourmet restaurants. I could explore both at Golf du Touquet as the contemporary clubhouse is open to everyone and features the very popular restaurant The Spoon. I had lunch at The Spoon, enjoying a lovely salmon dish created by its chef, Fabrice Chereau. Instead of a dessert I indulged in the gourmet coffee – a small cup of freshly ground coffee accompanied by six mini-desserts. Exquisite.

Le Touquet has been a centre of excellence for golf since the early twentieth century after the town was acquired in 1902 by two Englishmen, Allen Stoneham and John Whitley, founders of the company Le Touquet Syndicate Ltd. By this time Le Touquet, simply as Paris-Plage, was flourishing as a summer resort but very quiet in the winter. In 1909 they decided to base Le Touquet on sports. The town acquired a casino, a hippodrome, tennis courts and a golf course. Today Le Touquet Golf Club has three courses. Its famous links course, La Mer, has recently been restored to championship golf layout, as it was when Seve Ballesteros won the French Open in 1977. La Mer is the top course in France and rated as one of the best courses in Europe. In contrast, the eighteen hole Le Forêt course snakes through the pine woods going deeper and deeper into the trees. This course is gradually being restored to the original design of the 1930s. The complex also features a nine-hole course, Le Manoir, and a boutique hotel of the same name. Le Touquet is the ideal destination for golfers and the non-golfers in the family will also find plenty to entertain them in the town centre, my next stop. ...... (follow the instructions below for accessing the rest of this article).
This article is featured in the app "GPSmyCity: Walks in 1K+ Cities" on iTunes App Store and Google Play. You can download the app to your mobile device to read the article offline and create a self-guided walking tour to visit the attractions featured in this article. The app turns your mobile device into a personal tour guide and it works offline, so no data plan is needed when traveling abroad.