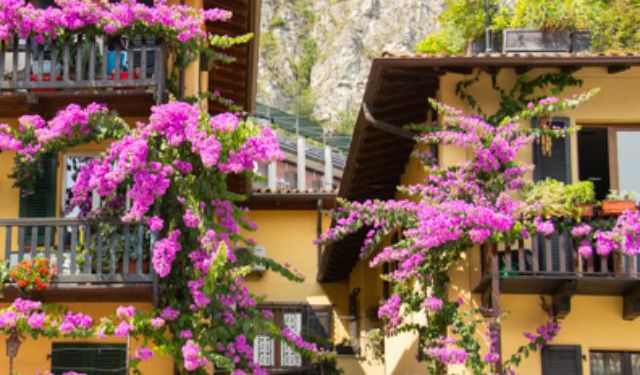 Approaching Limone from Lake Garda the visitor is immediately struck by an abundance of lemon groves and olive trees. The buildings along the shore-line are festooned with the brilliant blooms of bougainvillea and its long promenade is lined with oleander trees. Even its name suggests a plant and reflects its horticultural history.

One theory regarding the origin of this town’s name is that it was named for the lemons that have been grown around Lake Garda for centuries. In 1599 Grattorolo in his History of the Salò Riviera was quoted as saying of Limone “long before any buildings existed, there was a lemon tree: when boatmen sought shelter from the fury of the wind, they said they went to the lemon tree.” Lemons were first imported to Lake Garda by the monks at the Saint Francis monastery in Gargnano. From there the cultivation of lemons spread to Toscolana Maderno. All these towns are at the southern end of Lake Garda. To grow lemons at the northern end soil had to be taken there from the south and lemon groves were built to protect the plants from occasional winter frosts. These groves, or limonaie, had walls, columns, stairs, doorways and beams. Panes of glass were fitted onto the latter. In Limone most of these buildings were built by the Bettoni family in the gardens of Garbéra, Reamòl and Nua. Limone became known as the “lemon town”, and its lemon groves were immortalized by painters, writers and poets. ...... (follow the instructions below for accessing the rest of this article).
This article is featured in the app "GPSmyCity: Walks in 1K+ Cities" on iTunes App Store and Google Play. You can download this article for FREE and read it offline on your mobile device.