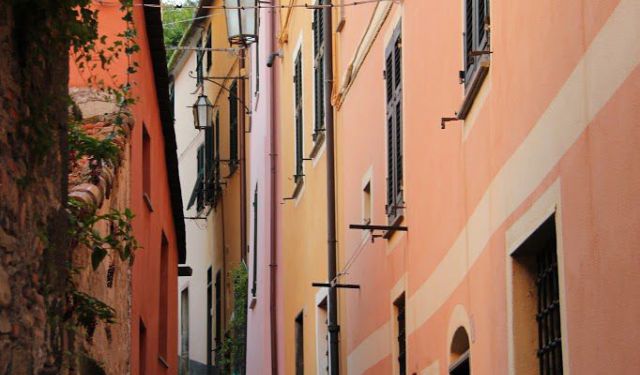 Twice a week in Levanto you can enjoy the so-called History Walking Tour in the historical part of the village. A guided walk to discover the local history and culture. On Monday the tour is in English and on Saturday in Italian. I wanted to participate from the beginning of the summer and finally last week I signed in with Ale.

The appointment is always at 6:00 p.m. in Piazza Cavour, where we met the group that together with us had been guided for about two hours by Aldo Viviani, a man of great culture and even greater desire to share it and pass it on.

And here is what I learned on the village in which I have now lived and worked for a few years (it’s never too late to learn something…): you should pronounce Lèvanto or Lievàntu in the dialect of Genoa, it is a small town of about 5000 residents, including those living in the twenty hamlets in the valley.

The origins of Levanto date back to the Roman times. The archives of the region have in fact documentation of a small village called Ceula, situated on a hill and corresponding to the current village of Montale. It was a strategic junction on the location along the Via Ligurum, the ancient Roman track passing near the coast. In 476, with the fall of the Western Roman Empire, the village is subject to the Byzantine Empire and later the Lombards. With imperial diploma of Frederick Barbarossa, dated to 1164, the primitive coastal town of Levanto, mentioned for the first time in an official document, is confirmed as feudal property of the Malaspina family. ...... (follow the instructions below for accessing the rest of this article).
This article is featured in the app "GPSmyCity: Walks in 1K+ Cities" on iTunes App Store and Google Play. You can download the app to your mobile device to read the article offline and create a self-guided walking tour to visit the attractions featured in this article. The app turns your mobile device into a personal tour guide and it works offline, so no data plan is needed when traveling abroad.