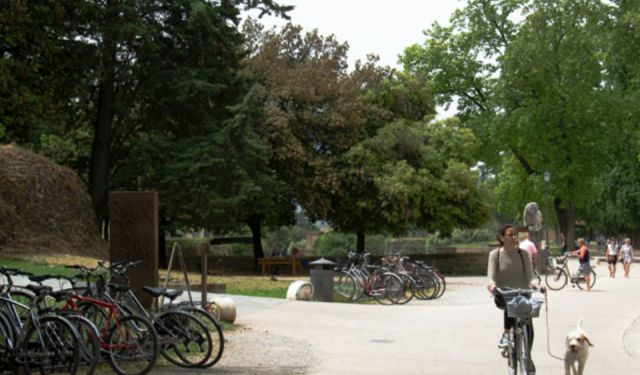 Lucca in Tuscany is one of my favourite cities because it has so much to offer. I can visit the many interesting attractions dispersed around the town, browse a wide range of shops, enjoy a leisurely coffee in one of its many piazze or walk around its walls.

This city is one of the few cities in the world that has kept its Renaissance circle of walls intact – historic evidence of a small, proud city, then the capital of a Republic, standing firm against its more powerful neighbours and in particular Florence.The construction of the present walls began during the sixteenth century to cope with the rapid advances in warfare techniques that had rendered the medieval walls obsolete. This was the fourth stage in the construction of these walls. The first circle was the ancient Roman walls of which very little remains. During the eleventh and twelfth centuries construction of the first medieval walls began and they were completed in the thirteenth century and the third stage was the extension of these walls two centuries later to deal with an expanding population. The present walls are an excellent example of military science during the period in which they were built (1545 – 1650) and important military architects such as Jacopo Seghizza and Alessandro Resta were employed. The walls which are twelve metres high and stretch for over four kilometres are formed of eleven ramparts or bastions all of different shapes with different characteristics but their purpose was the same, to house the guards and protect a section of the wall. Before the new walls were begun a large area around their foundations was appropriated and the hamlets outside the ancient city walls were demolished and so were the churches of San Donato and San Pietro.  ...... (follow the instructions below for accessing the rest of this article).
This article is featured in the app "GPSmyCity: Walks in 1K+ Cities" on iTunes App Store and Google Play. You can download the app to your mobile device to read the article offline and create a self-guided walking tour to visit the attractions featured in this article. The app turns your mobile device into a personal tour guide and it works offline, so no data plan is needed when traveling abroad.