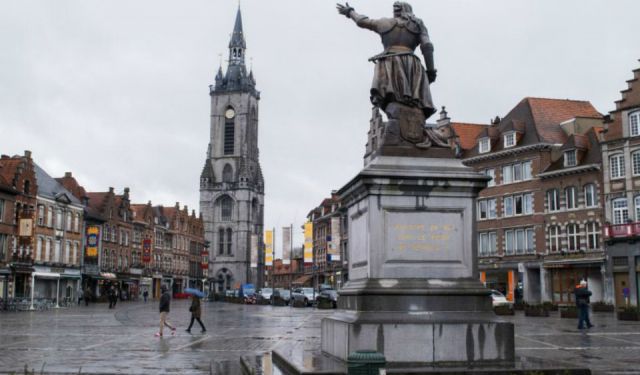 While staying with friends in Ghent, we decided to do a day trip somewhere on the weekend when they weren’t working. I had been visiting the main destinations of Flanders during the week, so we looked for places a little more offbeat. Ultimately we decided on the city of Tournai because it was the closest spot in Wallonia to Ghent and my friend also hadn’t been there before. This would be my only stop in Wallonia, the French speaking region, during my recent visit to Belgium.

As luck would have it, we picked a pretty rotten day for sightseeing. Belgium’s not particularly known for good weather but that day alternated between windy drizzle and heavy rain. Despite all that, we managed to see a fair bit of the city and enjoy our time there. Here’s what my friend and I managed do while visiting Tournai on a pretty miserable Belgian day.

First of all though, let me share a little on Tournai itself. The city of 70,000 people lies in the westernmost reaches of Wallonia, right against the French border. It’s in fact far closer to French cities Lille and Roubaix than it is any other major Belgian city. The city of Tournai also has quite the noteworthy history. ...... (follow the instructions below for accessing the rest of this article).
This article is featured in the app "GPSmyCity: Walks in 1K+ Cities" on iTunes App Store and Google Play. You can download the app to your mobile device to read the article offline and create a self-guided walking tour to visit the attractions featured in this article. The app turns your mobile device into a personal tour guide and it works offline, so no data plan is needed when traveling abroad.